A quartet of pioneering concept cars will be another of the major highlights at this week’s London Classic Car Show (23-26 February).

Spanning more than 70 years of automotive history, the rarely-seen foursome will form a special showcase curated by two of the UK’s premier monthly motoring titles: Octane and EVO magazines.

The earliest is the Aston Martin Atom, one of the very first fully-functioning concept cars and the latest is the stunning Jaguar C-X75 which was unveiled at the 2010 Paris Motor Show and more recently starred in the James Bond film Spectre.

The other two ‘back to the future’ show-stoppers may come from more mainstream manufacturers – Vauxhall and Peugeot – but are no less extreme. Dating back to 1970, the low-line Vauxhall SRV is still a head-turner nearly half a century later while the 217mph Peugeot Oxia is every bit as attention grabbing.

“Concept cars are no strangers to motor shows but it’s not often that they reappear decades later as eye-catching classics,” said event director Bas Bungish. “Their presence at The London Classic Car Show is sure to be a big talking point among intrigued visitors.”

Designed by Claude Hill under the watch of Gordon Sutherland, the Aston Martin Atom was unveiled shortly before the outbreak of World War Two and was seriously forward-thinking for the time, with aircraft-inspired touches inside and out.

The aluminium-skinned car, powered by a 1970cc four-cylinder engine, impressed David Brown enough that, following a short test drive, he made the historic decision to buy Aston Martin.

The Vauxhall SRV (Styling Research Vehicle) was conceived for the 1970 Earls Court Motor Show and influenced by the Le Mans cars of the time. The SRV was never intended to become a working vehicle, which meant Wayne Cherry and his designers were able to ignore all practical considerations. Hence the outrageously long bodywork with gullwing rear doors, the aerofoil section of the nose – theoretically adjustable while on the move – and the spaceship-looking interior with dozens of switches and gauges. 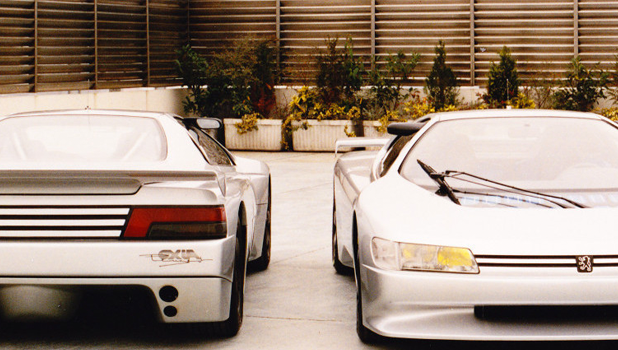 The equally-striking Oxia was developed at a rumoured cost of eight million Francs. Though aesthetically very much a Peugeot product of the 1980s, it offered outstanding performance for the ages: 670bhp and 217mph from a twin-turbocharged 2849cc V6 similar to the unit used in the WM P88 Le Mans car. All that power was made manageable by four-wheel drive, four-wheel steering and electronically controlled front and rear differentials. There was cutting-edge (for the time) technology inside the cabin, too, including a CD player and radio telephone.

The fourth car on display at ExCeL – the Jaguar C-X75 – came along at just the wrong time, its development coinciding most unfortunately with the global economic crisis. As a result, just five prototypes of the 850bhp hybrid supercar were built before the project was scrapped. The C-X75 did enjoy a moment in the sun in 2015, however: a reproduction (visually identical but without the original’s F1-inspired engine) featured prominently in the James Bond film, Spectre.

Those wanting to see these four astounding pioneers can purchase tickets from the show website – London Classic Show. Advance prices start at £24 for single adult entry (£27 on the door on the day). Tickets for Thursday’s star-studded Gala Evening cost £42 with access to the Grand Avenue Club, where the interviews take place, priced at £70. All London Classic Car Show tickets provide free entry to Historic Motorsport International, the new sister show dedicated to historic racing and rallying.

HMI will open its doors at 12 noon on Thursday, 23 February while the London Classic Car Show will burst into life at 3pm that afternoon. The LCCS closes at 9.30pm on the opening Thursday, runs from 10am to 6pm on Friday and Saturday and from 10am to 5pm on Sunday.