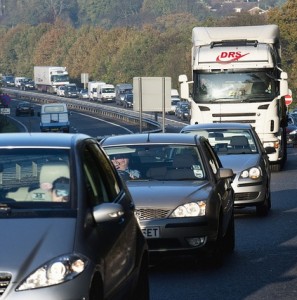 The sixth edition of the TomTom Traffic Index shows that across the UK, typical journey times take 23% longer in morning and evening rush hours.

TomTom also revealed traffic jams in 11 out of 17 of Britain’s biggest cities have worsened over the past year.

Cities where congestion levels have gone up since this time last year include Belfast, Brighton, London, Manchester, Leicester, Sheffield, Liverpool and Newcastle.

Only Edinburgh, Leeds-Bradford and Nottingham have seen congestion levels improve.

Harold Goddijn, CEO of TomTom, said: “We are seeing a clear pattern which shows that congestion levels increase as economies emerge from recession.

“The traditional responses to tackling congestion, like building new roads or widening existing ones are no longer proving effective.

The TomTom Traffic Index shows Belfast remains the most congested city in the UK, with journey times up to 88% longer in morning peak times and 32% throughout the day.

Second is Bristol, with journey times up to 66% longer in evening peak times, followed by Brighton, where travelling during rush hour takes 45% longer than usual.

The TomTom Traffic Index is the world’s most accurate barometer of traffic congestion in 169 cities across six continents.