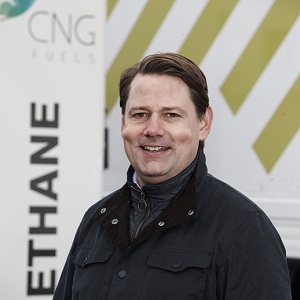 The project, which has received funding from the Office for Low Emissions Vehicles (OLEV) in partnership with Innovate UK, aims to encourage UK fleet operators to switch from diesel to cost-effective, low-carbon biomethane fuel by demonstrating performance benefits, and by showing that CNG stations can support growing demand for gas.

The new Northampton public access refuelling station will open this autumn at the Red Lion Truck Stop, off junction 16 of the M1, just up the road from Magna Park, Milton Keynes, one of the UK’s largest distribution parks where Waitrose and John Lewis have their national distribution hub.

The station will be used by a new Waitrose fleet of 58 state-of-the-art dedicated CNG trucks engaged in long-haul, inter-city and urban runs, including six trialling zero-emissions refrigeration units powered by the truck’s gas engine. Performance data will be analysed by a University of Cambridge team.

Northampton will be able to refuel more than 350 trucks a day and can be supplied by mobile CNG trailers if an emergency cuts off its gas supply. Back-up power generation will allow it to continue operating in a power cut. 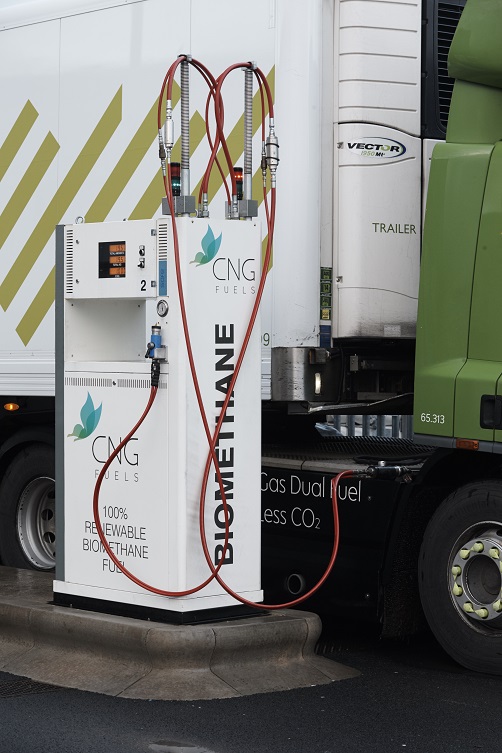 Renewable biomethane CNG fuel is the most cost-effective and environmentally friendly alternative to diesel. It is 30%-40% cheaper and typically cuts vehicle CO2 emissions by up to 85%. HGVs account for just 5% of vehicle miles on the country’s roads but 16% of greenhouse gas emissions.

“This study will help convince others to make the shift and demonstrates that this is a solution that can be scaled up rapidly within fleets. Fleet operators and drivers are enjoying the ‘diesel-like’ simplicity of biomethane fuel while making a major impact on our environment by tackling the challenges associated with lowering HGV emissions”

Interest in the fuel has grown rapidly. Demand has nearly tripled at CNG Fuels’ flagship station, in Leyland, Lancashire, up 170% in the 12 months to March. The company is developing a nationwide network of refuelling stations on major haulage routes, fed by the UK’s gas grid and compressing gas into fuel at the point of delivery.

Two mobile CNG trailers, the first of their kind in the UK, will stand by to maintain service to the new Northampton station if an emergency cuts off its gas pipeline. They will provide a continuous back-up supply, taking turns bringing gas from the nearest operational station. The 40-foot trailers each hold seven tonnes of gas in composite cylinders, enough to refuel 70 trucks.

Waitrose has helped pioneer CNG in the UK. It worked with equipment providers to extend vehicle range to over 500 miles and launched Europe’s most advanced CNG trucks last year. It now has a fleet of 49 dedicated CNG trucks, with nine more due to enter service in the autumn. They will take part in the trial alongside four John Lewis CNG gas trucks. The company expects the lower running costs will lead to lifetime savings of between £75,000 and £100,000 per truck compared with a diesel equivalent.

Justin Laney, General Manager Central Transport, John Lewis Partnership, said: “We’re committed to reducing the emissions from our fleet. This study will help us quantify not just the carbon emissions reduction of using biomethane, but also the benefits of using our industry-leading clean refrigeration equipment which we expect to show significant benefits for air quality.

“We’ve worked with the University of Cambridge on a number of projects in the past, so look forward to the outcome of this latest collaboration.”

A team from the Centre for Sustainable Road Freight at Cambridge University will compare the fuel consumption and CO2 emissions of the CNG trucks with diesel equivalents in a range of settings. It will also compare the performance of electric refrigeration units powered by the CNG engine with conventional units powered by auxiliary diesel engines.

The trial is due to finish in September 2019 and will produce the first report on the performance of a large dedicated CNG fleet and its refuelling infrastructure for OLEV, giving it valuable evidence to promote the benefits of low-carbon technologies to the freight transport industry.

Venn Chesterton, Ultra Low Emission Vehicle Lead, Innovate UK, said: “Innovate UK are looking forward to the results of this work and understanding the real-world emissions associated with this technology and how it could play a role in decarbonising the UK’s HGV sector.”

The project is part of the Low Emission Freight and Logistics Trial, funded by the OLEV in partnership with Innovate UK. The funding has contributed to elements of station refuelling and back up infrastructure, the two mobile CNG trailers, 50 new Waitrose and John Lewis CNG Trucks, as well as the Cambridge University analysis.

In January 2017, OLEV announced that 20 trial projects were to receive funding of £20m to demonstrate new technologies and to encourage the widespread introduction of low and zero emission vehicles to UK commercial fleets. In total over 300 vehicles will be trialled across the UK.

The Low Emission Freight and Logistics Trial will help the UK meet its CO2 reduction targets – and represents another step towards the government’s target for all new cars and vans to be zero emission by 2040.