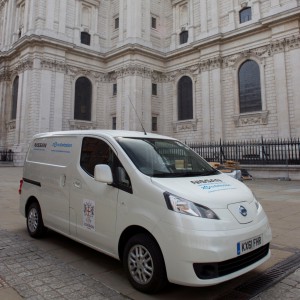 Nissan’s all-electric e-NV200 van is enjoying praise after completing a successful one-week trial period with the City of London Corporation.

The super-green vehicle was trialled by the City of London Corporation as part of efforts to meet the highest levels of environmental responsibility across all areas.

It was offered to the organisation by Nissan following a similarly successful trial of the all-electric Nissan Leaf earlier this year.

The City of London Corporation – the local authority services provider for the ‘Square Mile’ – tested the vehicle on the streets of central London.

Driver feedback, the Corporation claim, was universally positive, as they look to reduce costs and emissions in the City.

John Tomlinson, Chairman of the City of London Corporation’s Port Health and Environmental Services Committee, said: “We are pleased to be one of the first organisations to trial the e-NV200 – and the feedback has been very positive.

“We also had access to the Nissan Leaf which was well received by our staff, so we had no hesitation in wanting to try the e-NV200.

“The drivers were impressed with its comfort and responsiveness.”

Barry Beeston, Corporate Sales Director at Nissan GB, added: “The e-NV200 is one of our most exciting developments in years and the trial with the City of London Corporation marked an important part of Nissan’s research and development process ahead of the vehicle’s 2014 launch.

“We now look forward to further developing a relationship with City of London Corporation over the coming months.”