Champions line up for rematch in 2015 MPG Marathon 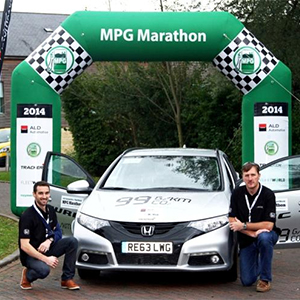 Reigning champions, Fergal McGrath and James Warren, have again entered the MPG Marathon, the UK’s most prestigious lean-driving challenge, serving up the mouth-watering prospect of a rematch with the previous year’s winners, Nick Chapman and Rosemary Horner.

However, it was a very close run thing as the Leicester pair, driving a 1.6 litre TDCi Ford Fiesta Titanium ECOnetic, achieved an average of 97.08mpg, just fractions of a mile per gallon behind the eventual winners.

This year McGrath and Warren are again in a Honda Civic Tourer 1.6 i-DTEC as they attempt to retain their hard-won title, and in doing so become only the second pair of drivers to win the event two years in a row.

“Fergal and James were quite exceptional in recording an average of 97.92mpg over the two days of last year’s event. They emerged triumphant against a very strong field of competitors, including nine former champions. And now we get the opportunity to see if they can do it all over again,” he said.

Previous champions, Chapman and Homer, will this year be taking part in one of five identical BMW 320d ED Sport models, which are participating in an event within the  overall event, to find the ‘most efficient fleet driver’ for the first time.

Five sets of company car drivers will go head-to-head in the same BMW diesels to see who can complete the 300-mile course in the most fuel efficient manner – and win the new title.

This year’s MPG Marathon, which, in its 15th year, is being sponsored for the first time by Barclaycard Fuel+ in association with TMC, and takes place on Tuesday, September 29 and Wednesday, September 30.

It will set off from the stunning Heythrop Park Hotel and the Heythrop Park Resort near Enstone in Oxfordshire over a two-day, 300-mile plus route and includes a number of alternative and conventionally powered vehicles.

Car makers entering this year include BMW, Caterham, Ford, Peugeot, Renault, Citroen, Honda, Mazda, Kia and Jaguar who have confirmed they will be entering their very latest models for this year’s event.

Other drivers who have already entered this year’s event include Ben Wilson, this year’s ‘Patrol of the Year’ from sponsor, RAC,  who will be driving in the new Mercedes Vito van that he uses every day in the course of his patrol duties.

He will be supported by colleagues from the RAC refuelling patrol team who will be on-hand around the course to ensure participants keep on the move and are operating within the rules of the challenge.

This year’s MPG Marathon, which is also being co-sponsored by ALD Automotive and TRACKER, allows competitors to find the most efficient route between set checkpoints, reprising the approach that was first introduced two years ago.

In previous years, the MPG Marathon has attracted motoring celebrities, journalists, academics and senior figures from the automotive industry, all striving to see if they can complete the chosen route using as little fuel as possible.

It is also open to fleet managers, representatives from fleet services, contract hire and leasing and fleet management companies, and from the motor industry, plus anyone associated with it.

Electric and hybrid vehicle classes will again be included in this year’s event, and they will be joining the more familiar diesel and petrol engined cars and vans that traditionally take part in the event.

There are eight main classes of passenger cars in this year’s MPG Marathon, restricted to a maximum carbon ceiling of 190g/km, including hybrid, range-extender and fully electric vehicles, plus five main classes of vans up to 3,500kg gross vehicle weight.