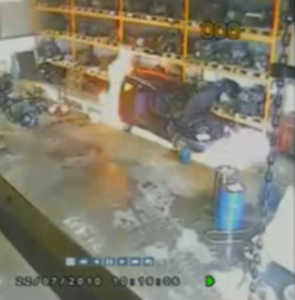 A Lancashire car salvage firm have been fined £40,000, plus £25,000 costs, after an employee was severely burnt by an inspection pit which caught fire.

Lee Roberts, 33, a mechanic from Wigan, suffered severe injuries in July 2010 when a pit he was standing on at Douglas Valley Breakers’ Coppull workshop burst into flames.

He was caught on CCTV, seen below, walking into the pit to remove fuel from underneath a van, before running out after it was engulfed by fire.

Mr Roberts sustained severe burns to his hands, legs and nose in the fire, and has not been able to return to work since the incident.

Douglas Valley Breakers were convicted last week after a joint investigation by the Health and Safety Executive (HSE) and Lancashire Fire and Rescue Service discovered multiple health and safety failings.

Employees often punctured the fuel tank on vehicles to allow fuel to drain into an open container on the floor of the pit, it was alleged.

Magistrates heard that an electric drill was also sometimes used to make a hole in the tank.

Investigators concluded that the most likely cause of the fire was drained fuel being set alight by a spark from the electric drill or an extension lead in the pit.

The fire grew rapidly due to the presence of petrol and was further fuelled by plastic car body parts and items of vehicle upholstery.

It spread to involve the whole of the workshop, with a major response was required from Lancashire Fire and Rescue Service to bring the fire under control and ensure the safety of people nearby.

“I still remember the noise of the petrol fumes igniting and a wave of blue flames engulfing the pit,” said Mr Roberts.

“The pain was instant and intense.

“They put me into an induced coma to stop the pain, and it was at least a couple of days later when I came around.

“When I woke up, I could feel the pain immediately.

“Even now, more than three years later, I still suffer flashbacks that cause me to wake in the middle of the night in a cold sweat.

“I haven’t been able to work since the accident and feel that I no longer want to be a car dismantler – the only trade I have ever known.”

The court was told Douglas Valley Breakers should never have allowed fuel to be drained into inspection pits, where vapours could accumulate.

It was also insisted the company should have made sure there were no ignition sources nearby, such as electrical equipment.

The company also failed to ensure fuel was safely removed from the vehicle, despite having a piece of equipment that could be used to drain it into a sealed container.

While inspecting CCTV from the site, HSE inspectors claimed they identified several other incidents of unsafe behaviour.

These included workers climbing up the outside of storage racks, and riding on the forks of a telehandler to reach items high up on the racks.

Lancashire Fire and Rescue Service also found the company did not have suitable fire detectors and alarms and failed to provide adequate fire safety training to staff.

David Myrtle, HSE Inspector, said: “Lee suffered severe burns as a result of this incident but he was very lucky not to have been killed.

“It failed to properly consider the risks its employees faced while removing fuel from vehicles, or to do anything about them.

“It was therefore almost inevitable that a worker would be badly burned in a fire.

“The company had the right equipment to do the job properly but instead it allowed workers to stand in a pit surrounded by fuel vapours where just one spark from electric equipment could start a fire.

“If the fuel had been removed in a well-ventilated area, or even outside, without any ignition sources nearby then the severe burns Lee suffered could have been avoided.

“Sadly, our investigation found the company’s overall attitude to health and safety was poor to say the least.”