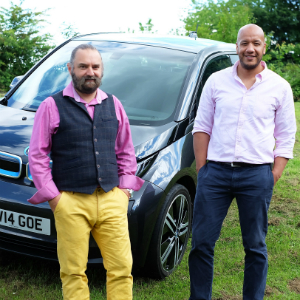 TWO North East businesses have joined forces to provide a one-stop shop for people looking for buy second-hand electric cars after identifying a gap in the market.

Car dealer Martin Hodgson is working with Darren Pegram of electric vehicle charging cable company 4EV to offer customers advice and support when it comes to choosing and charging their electric car.

With more than 15 years’ experience selling second-hand vehicles through his business Parkgate Motor Co., Martin decided to venture into the electric car market just nine months ago and was surprised at the level of demand.

He said: “I could see that electric vehicles were increasing in popularity so decided to buy a couple of Nissan LEAFs at auction, one to try myself and one to sell on. I had no idea what the response would be but had interest almost straight away.”

Not long after his first sale Martin met Darren through a mutual friend and the two, who are both based in Darlington, realised that with the growing demand in the region for electric vehicles there was potential to offer a full sales and advice service to customers.

Recent figures release by the North East Local Enterprise Partnership show 10% of all UK registered electric vehicles are based in the North East, with 1,163 electric charging points currently operation across the region.

Having set up his online charging cable and EV accessory company 4EV last year, Darren had the knowledge required to advise customers on what options were available when it came to charging their car and to answer any general questions they had about driving an EV.

Now Martin is able to offer his customers charging cables with their new car and can refer them to Darren for additional accessories and advice, both before, during and after their sale.

Darren said: “The electric vehicle market is growing at an incredible rate and the North East is becoming a real hub, with people in this region really embracing the idea of EVs.

“I set up 4EV because I could see there wasn’t really anyone out there selling reasonably priced charging cables online and Martin has found a similar situation with the second-hand electric vehicles – there is a demand but not many people meeting that at the moment.

“I think it’s really important that local independent business support each other and between Martin’s business and 4EV we can offer new EV owners the full package, from sales through to advice.”

Electric vehicles are a new direction for self-confessed petrol head Martin, who normally deals in motorhomes and sports cars. But having sold more than 20 EVs over the last few months, and with customers up and down the country, he believes it is an area with strong business potential.

He said: “I think people are really starting to understand the benefits electric vehicles can bring. Obviously there are the environmental benefits but also the cost savings – the servicing costs are minimal because there are fewer mechanical parts and the savings on fuel costs are huge.

“The cars I buy are mostly all ex-fleet or lease vehicles and represent a serious saving compared to the cost of a brand new car which seems to appeal to people who want to try an electric vehicle but not spend a large amount of money on something they are not sure they will like.”