Beaulieu will be celebrating 70 years of the Land Rover 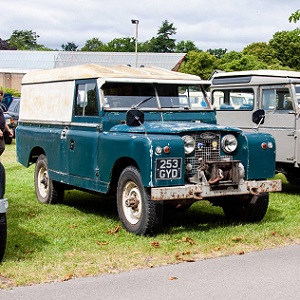 Beaulieu will be celebrating 70 years of the nation’s favourite 4×4 with Simply Land Rover on Sunday June 24th, featuring a Land Rover-themed autojumble, off-road Forest Drive and hundreds of Land Rovers on show.

For the first time the rally will feature Simply Rummage, a one-stop shop for every Land Rover enthusiast where essential and hard-to-find spare parts and accessories will be bought, sold and swapped. Following in the footsteps of Land Rover Rummage, a well-established trading corner of Beaulieu’s Spring Autojumble, Simply Rummage will become a bargain-filled extra feature of Simply Land Rover marking the anniversary year.

Another show highlight will be the return of the popular Beaulieu Forest Drive, giving enthusiasts the chance to practice off-road driving skills. Held in association with Land Rover Experience West Country, this separately charged feature allows owners to try their vehicles on the challenging forest course, while those without their own can drive or ride in a Land Rover Experience vehicle. For more details, including prices and terms and conditions, see www.beaulieu.co.uk/events/simply-land-rover.

The rally will see all ages and models of Land Rover park up in the grounds of the National Motor Museum, where enthusiasts can catch-up, compare vehicles and enjoy all of the features of the Beaulieu attraction.

Look out for the Series I that started the Land Rover story, and the rugged Series II, Series III and Defender that followed. The successful Discovery is sure to be well represented in the diverse line-up, along with the Freelander, classic and modern Range Rovers and all manner of home-built Land Rover derivatives. Whether it is a pristine example or well-used working vehicle, all Land Rovers are welcome.

Throughout the day, rally participants and Beaulieu visitors can vote for their favourite Land Rover of the show in the People’s Choice Award, with the winner receiving a Beaulieu trophy and Autoglym prize.

For those driving Land Rovers into Beaulieu to take part in the show, participant tickets are £10 an adult, £5 a child (aged 5-16) if bought in advance online before 5pm on June 21st. Tickets bought online after that time, or on the door, are £12 an adult and £6 a child. All other visitors can buy a general admission ticket to Beaulieu. For tickets or more information see www.beaulieu.co.uk/events/simply-land-rover.

Admission includes entrance to all of the Beaulieu attraction, including the National Motor Museum and its collection of more than 250 vehicles, the World of Top Gear, On Screen Cars, 13th century Beaulieu Abbey, the Montagu ancestral home of Palace House and its stunning grounds and gardens.

Entry is from 9am for rally participants, when the Brabazon Restaurant will be serving hot drinks and breakfast snacks. All other visitors should enter Beaulieu though the Visitor Reception building with a standard attraction admission ticket from 10am.

Simply Land Rover is one of nine Simply rallies at Beaulieu in 2018. New for this year is Simply Audi on April 29th, while still to come are Simply Ford on May 6th, Simply Porsche on June 3rd, Simply VW on June 16th, Simply Jaguar on July 8th, Simply Japanese on July 29th and Simply Smart on November 11th. For tickets or more details see www.beaulieu.co.uk/events.