Battle Of The Cosworths – But Which Is Best? 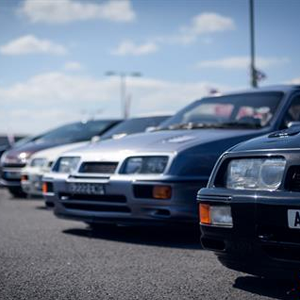 Two of the most iconic performance Fords ever built are celebrating milestone anniversaries this year, but which is the best?

The organisers of Britain’s biggest event dedicated to the Blue Oval are aiming to find out, by conducting a special survey in the run-up to Ford Fair 2017, where the 30th birthday of the Sierra RS500 and 25th birthday of the Escort RS Cosworth will be celebrated in style.

Both wear the famous ‘Cosworth’ badge, both are based on mainstream production cars and both have an enviable motorsport pedigree – but only one can be crowned the nation’s favourite.

Will it be the RS500, a car developed for homologation purposes to give the Eighties’ favourite repmobile, the Sierra, a chance to compete in World, European and British Touring Car Championships? Or will it be the Escort Cosworth, launched in 1992 and based on a shortened version of the Sierra Sapphire Cosworth platform to give it 4WD capability beneath a radically restyled three-door Escort body shell? The Escort was the car that propelled Ford to World Rally Championship stardom in the hands of drivers such as Francois Delacour, Carlos Sainz and Malcolm Wilson and is widely regarded as one of the best performance Fords ever made.

Fans can cast their votes to determine which of the Cosworths is the nation’s favourite here.

Taking place at the legendary Silverstone Circuit in Northants, Ford Fair will have over 4,000 club cars on display, including many other classic and modern Fords, plus a special selection of cars from Ford itself, including the all-new Fiesta.

The Cosworth anniversary display will be one of the major draws of the event, while other star features will include The Live Action Arena, which will once again be at the centre of the show, a live performance from stunt driver Paul Swift, bookable track time for show visitors and a dedicated Classic Zone, hosted by Classic Ford magazine, which will play host to all manner of historic heroes from Anglia to Zodiac.

Once again, the event will see headline sponsorship from aftermarket Ford specialists, mountune, while Hardrace, KSport, BC Racing, BC Forged Wheels and Goodridge are other key sponsors.

New for 2017, Ford Fair will also host the inaugural Fast Ford Awards. This special display will form part of the Fast Ford stand at the show, and will include winners of various categories, such as ‘Best Street Car’, ‘Best Engine Swap’, ‘Best Modern Ford’, ‘Best Old School Ford’ and many more.

This epic display of the UK’s finest fast Fords will coincide with the very latest issue of Fast Ford magazine – available to buy at the show a week before it hits the shops. The ‘Fast Ford Awards’ special issue will include full details of the various categories and all of winners. And, with all of the winners proudly on display at the front of the Fast Ford stand, you will be able to get up close and personal with the very cars in the magazine.

At the show, all of the Award winners will be entered into the Fast Ford People’s Choice Award, which will be decided on the day.

Also, you’ll find the Ford Fair merchandise marquee on the Fast Ford stand, where you can pick up the latest issue of the magazine, take advantage of some show-exclusive subscription deals, or get your hands on the latest branded goodies.

Other show highlights will include a Show & Shine, individual entries, public track time and a packed retail village.

Already, over 4,000 Fords are booked into club displays, promising a fun-filled day for all fans of the UK’s most popular car brand.