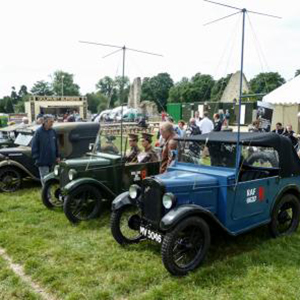 Well, I have never seen one of those!’ was possibly the most-repeated phrase heard at the 53rd National Austin 7 Rally held at Beaulieu on 5th July. With a theme of ‘Austin 7s and their Cousins’ the event attracted a unique collection of vehicles that came from as far away as France and Germany to join in this most popular of annual events.

Alongside dozens of the more familiar home-produced Austins were rarities from BMW Dixi, Rosengart and Holden – all owing their heritage to the genius of Sir Herbert Austin and his designers who produced the first Austin 7 model in 1922. The car went on to become ‘the motor for the millions’ and nowadays is one of the best-loved of pre-war classics.

The rally also had a superb display of military Austin 7s. Although diminutive in size the 7 proved itself in wartime and the contribution of the plucky little car was shown off in great style by a selection showing the different roles that it was adapted to.

For many, the rally was a weekend event with an organised drive through the New Forest on the Saturday afternoon and a highly sociable barbecue in the evening; then the rally proper on the Sunday.

For enthusiasts, the trade stalls provided a wide range of parts and accessories that keep Austin 7s on the road, while for the general public an exciting and entertaining driving-test could be watched  in the arena. The Trials section of the 750 Motor Club (which organises the rally) provided demonstration rides and the afternoon was rounded off with a prize-giving ceremony.

Ian Nelson, who leads the organising team, was delighted with the success of the rally: “We had a very strong entry of Austin 7s and other marques this year and we were delighted to welcome so many of our continental friends with their ‘cousins’. It was also very encouraging to see a substantial number of younger people taking part as they will help to preserve Austin 7s and ensure the continuation of the rally long into the future.”

The 2016 Rally will be held at Beaulieu on Sunday 3rd July and the theme will be ‘A7 Sports and Racing Cars’.