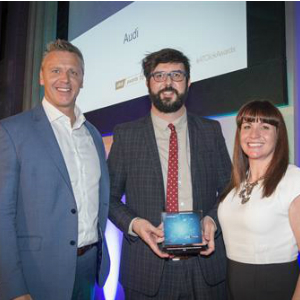 Audi UK, Arnold Clark and Imperial Cars claimed top recognition at the Auto Trader Click Awards 2016 as Audi UK took the titles of Best Manufacturer for Digital Customer Experience and Data Driven Retailer of the Year in the Manufacturing category, while Arnold Clark was presented with the awards for Data Driven Retailer of the Year and Best Integrated Marketing Approach – Franchise & Supermarket.

The final double winner of the event was Imperial Cars, which collected Digital Forecourt of the Year for Franchise & Supermarket and Data Driven Retailer of the Year – Supermarket.

The Auto Trader Click Awards, now in their ninth year, were held at the impressive Grade II listed Banking Hall in the heart of City of London and featured award categories focused on celebrating data driven retailing and digital integrated marketing strategies.

With twelve awards in total that each recognised excellence in digital automotive retailing among manufacturers, supermarkets and franchised companies, the winners were decided by a combination of consumer research, data analysis and an independent, expert judging panel.

The most coveted awards of the day, the Data Driven Retailer of the Year Awards, were presented to Imperial Cars for the Supermarket category and to Arnold Clark for the Franchise category, while Audi topped the Manufacturer category. The winners scored highly in the consumer research phase for their quality of online adverts, and ultimately were chosen by the expert panel of judges from leading digital companies including Amazon, Rightmove, LinkedIn and AOL.

The Auto Trader Click Awards’ Self-Nomination Awards made up the remaining categories, which also enabled independent retailers to put themselves forward for recognition of their digital retail accomplishments for the first time. The two new categories – Best Integrated Marketing Approach and Best Digital Initiative – were introduced following unprecedented demand and generated a wealth of strong contenders.

For Best Digital Initiative, entrants showed how they achieved their business objectives by creating a digital campaign or activation that embraced new technology, was truly innovative and achieved return on investment. The three categories of Franchise & Supermarket, Manufacturers and Independents were awarded to Renault Retail, BMW UK and Mike Brewer Motors.

Le-Etta Pearce, Auto Trader Sales and Service Director said: “The ninth year of the Click Awards has been another incredible success with many great companies recognised for their accomplishments in the digital automotive industry.

“It has been fascinating to see how retailers are adapting to the changes that digital and consumer trends present and it’s great to honour them in front of their peers. We have added the self-nomination categories for independent retailers this year to reflect more of the great examples of digital marketing we’ve seen across the industry. Innovation and progression can be seen across the industry, regardless of forecourt size.”