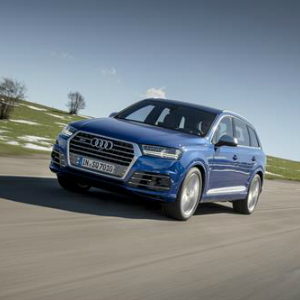 The world’s oldest surviving car magazine has honoured the world’s first ever series production car to feature an electrically powered compressor with its coveted ‘Innovation Award’. Autocar Magazine Editor Jim Holder presented the award acknowledging this and other innovations underpinning the all-new Audi SQ7 TDI at a ceremony held last night at Silverstone.

The performance-boosting compressor technology that supplements the two conventional exhaust-driven turbochargers in the new flagship of the Q7 range is dubbed ‘incredibly influential’ and ‘the start of a new thing’ within the automotive industry by the respected weekly motoring magazine. It is just one of a number of ground-breaking new departures benefiting the first ever S model in the Q7 range, including the electromechanical active-roll stabilisation system newly complementing the adaptive air suspension and the 48V electrical subsystem working with the conventional 12V network to provide the power base for these new technologies.

Commenting on the win, Editorial Director of Autocar, PistonHeads and What Car? Jim Holder explained: “What caught our judges’ eye this time was the combination of pioneering technologies being introduced by the VW Group, most immediately on the new Audi SQ7, which features an electrically powered compressor with a 48V electric sub-system for the first time. Both we and Audi believe it opens up an important new direction for the cars of the future.”

“The newly developed V8 engine of the Audi SQ7 TDI uses an electric powered compressor – that is a world first,” declared Dr. Stefan Knirsch, Member of the Board of Management for Technical Development at Audi.

This compressor supports the work of the two turbochargers especially at low revs and guarantees maximum sprinting capability with no turbo lag. The result is 435PS from 3,750rpm and a mighty 900Nm (663.8 lb ft) of torque from just 1,000rpm, a figure that comfortably leads the competitive field.

The same high performance 48 volt electrical subsystem that powers up the compressor in less than 250 milliseconds and enables it to spin to 70,000 revolutions per minute also provides the energy for the optional electromechanical active roll stabilisation. There is nothing comparable with this system among any of its direct competitors. It significantly reduces side tilt of the car and paves the way for firm, communicative handling by reducing roll on bends, achieving higher lateral acceleration and thus faster cornering.

The SQ7 TDI is the first Audi to feature the high-performance voltage system. A DC/DC converter connects it to the ‘standard’ 12 volt electrical system, and it is driven by a separate 48 volt lithium-ion battery mounted beneath the luggage compartment with a peak output of 13 kilowatts.

The UK’s fastest accelerating and most powerful diesel luxury SUV becomes available to order from the beginning of next month, priced from £70,970 OTR. It is fitted as standard with an exceptional portfolio of equipment that includes all-LED headlights and LED rear lights, the fully-digital virtual cockpit, MMI navigation plus with MMI Touch and the latest developments in Audi connect, which bring infotainment updates and separate safety and service functionality within the car.

The electromechanical active roll stabilisation system is offered as part of a package aimed at the keenest drivers which also includes a sport differential optimising torque distribution at the rear axle for maximum handling adjustability and all-wheel-steering that also boosts high speed control while aiding manoeuvrability at parking speeds. Performance enthusiasts can also upgrade to carbon ceramic brake discs with 10-piston calipers for the ultimate in fade-resistant stopping power.