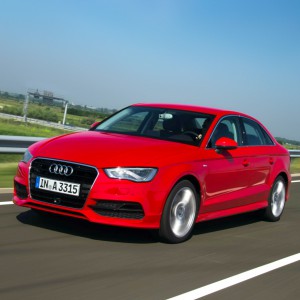 Audi are celebrating after the three-millionth A3 hatchback – a Sportback 2.0 TDI Quattro – left the production line in Ingolstadt.

The A3 started life 17 years ago and is now in its third generation – the latest of which includes a saloon form for the first time.

Dr Frank Dreves, Board of Management Member for Production at Audi AG, said: “Three million automobiles in the compact class is quite a performance.

“This success is backed by a strong team and an efficient production system.

“With the Audi A3, we have created a new brand segment – we have been setting standards in the compact class with innovative technology and first-class quality for 17 years now.”

Meanwhile, the new Audi A3 Sportback, launched this year, has seen an average of 700 examples roll off the assembly line every day.

Next year, the A3 range will also embrace the future with its first hybrid variant – the petrol-electric A3 e-tron.

This will be capable of covering up to 188mpg while emitting as little as 35g/km of CO2.