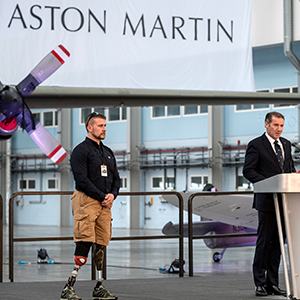 Aston Martin Lagonda Ltd are proud to announce an enduring partnership with the Royal Air Force Benevolent Fund, the RAF’s leading welfare charity. The strong links between the company and the Royal Air Force are clear, with Aston Martin’s two manufacturing facilities both having previously been RAF airfields.

The RAF Benevolent Fund has been the Royal Air Forces’ leading welfare charity for almost 100 years, providing financial and practical assistance to anyone who is serving, or has served in the RAF including their partners and dependents.

They provide assistance with a range of issues from childcare and relationship difficulties to injury and disability, and from financial hardship and debt to illness and bereavement. In 2016 the charity spent over £20 million supporting over 60,000 members of the RAF family.

Andy Palmer, President and CEO of Aston Martin, said: “We are extremely proud to be working closely with our partners the RAF Benevolent Fund in helping to support members of the RAF and their families.”

Check out the charity here