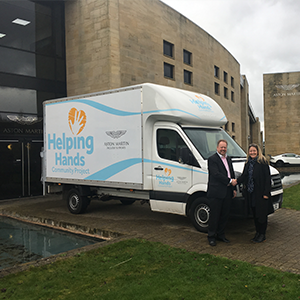 The Charity provides support to vulnerable people in the Warwickshire area, through a number of initiatives including mentoring, support for the homeless and those affected by domestic violence.

Aston Martin President and Chief Executive Officer Dr Andy Palmer said: “As a company we have an ongoing commitment to CSR and supporting the communities in which we operate are very much a part of this. Helping Hands is an excellent local charity, making a real difference in people’s lives and we are delighted to were able to support.”

Local MP Nadhim Zahawi said: “I am delighted to have played a small part in linking these two excellent local organisations and to see this partnership come to fruition.”