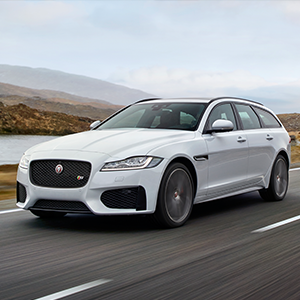 Jaguar’s dynamic new estate has been revealed by world tennis number one Andy Murray. The two-time Wimbledon champion pulled the covers off the new Jaguar XF Sportbrake before placing his precious Wimbledon trophy inside and sending it on a UK-wide tour to inspire the next generation of players.

Jaguar is the Official Car Partner of The Wimbledon Championships and to celebrate the relationship the premium estate was revealed on a replica Centre Court.

“Winning my first major title ten years ago was an amazing moment for me; the culmination of everything I’d worked for my whole life. I feel very lucky to have got to where I am today and hope that anyone passionate about tennis gets the opportunity to play and improve.

“Letting go of the trophy will be difficult, but there’s no better vehicle than the Jaguar XF Sportbrake to take it on this UK tour. I’m pleased that people are going to be able to get up close to the trophy when it visits schools and tennis clubs, and hopefully it might encourage people to pick up a racket this Summer.”
Andy Murray, world tennis number one

The XF Sportbrake joins Jaguar’s award-winning XF saloon in its tenth year of production. The XF was launched in 2007 and has now claimed almost 200 global awards. The saloon’s new Sportbrake sibling delivers equally impressive performance, design and technology, with greater practicality and space.

With sports car-derived handling, a practical 565-litre load space and advanced convenience and safety features, the XF Sportbrake has the best of Jaguar design and technology. It also delivers impressive aerodynamic efficiency of Cd 0.29.

Innovations include an intuitive gesture-controlled sunblind for the Sportbrake’s super-sized, full-length, panoramic roof, Driver Condition Monitoring to detect signs of tiredness after an active day and a waterproof Activity Key you can wear while playing sport. Customers can also specify Cabin Air Ionisation, which purifies air to provide protection against environmental pollution and promote health and wellbeing.

Self-levelling rear suspension ensures an effortless ride, even when towing loads of 2,000kg. The XF Sportbrake is available with Jaguar’s advanced range of clean and efficient four-cylinder Ingenium petrol and diesel engines with CO2 emissions as low as 118g/km. A choice of potent six-cylinder engines includes the characterful 380PS 3.0-litre supercharged V6 petrol or the 300PS TDV6, which accelerates from 0-100km/h in 6.6 seconds (0-60mph in 6.1seconds).

“As with the XF saloon, every line on the Sportbrake serves a clear purpose, creating a fast, sweeping silhouette. This gives the car a sense of speed and a very dynamic appearance. As a result, I think it looks just as sporty as the saloon, if not more so.”
Ian Callum, Jaguar Director of Design

After helping to introduce the XF Sportbrake, Andy Murray warmed up for Wimbledon with a light-hearted celebrity doubles match on a pop-up court. Murray and coach Jamie Delgado faced comedians Rob Brydon and Jimmy Carr in a contest streamed live online, with commentary by Tim Henman. 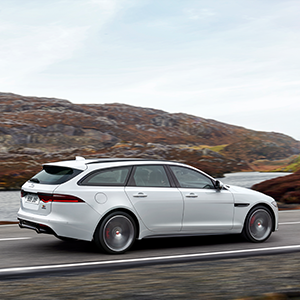 Jaguar is entering its third season as Official Car Partner to The Championships at Wimbledon, which runs from Monday 3 July to Sunday 16 July. Jaguar will supply 170 vehicles from its award-winning range, including the XE, XF, XJ and F-PACE.

To help inspire the next generation of tennis talents, Jaguar is doing something that has never been done before in the history of the Wimbledon Championship, and is taking the famous men’s singles trophy on a nationwide tour of clubs and schools. As Andy Murray counts down to the defence of his Wimbledon title later this month, the gilt cup will be chauffeured between venues in an XF Sportbrake.

The XF is manufactured at Jaguar Land Rover’s Castle Bromwich Plant alongside the XE, XJ and F-TYPE. Castle Bromwich is now building six model lines, double that of ten years ago when XF was introduced. Employees who build the new model celebrated by watching the live launch coverage.