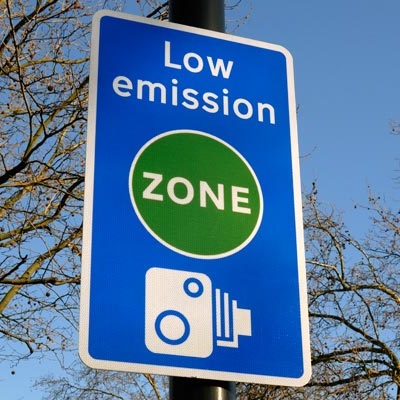 The Low Emission Zone was set up to encourage the most polluting heavy diesel vehicles driving in the capital to become cleaner. It covers most of Greater London and operates 24 hours a day, every day of the year. The tougher LEZ is already having an impact, with new data from City Hall showing compliance with the new standards is nearly at 90 per cent, compared to around 70 per cent in May 2019.

Earlier this year Transport for London announced that their entire 9,000-strong core bus fleet complies with the LEZ standards, and now meets or exceeds the cleanest Euro VI emissions standards.

The introduction of tougher standards for the LEZ, alongside the expansion of the Ultra Low Emission Zone later this year, is expected to reduce nitrogen oxides (NOx) emissions from road transport by around 30 per cent across London in 2021 and will help deliver wider benefits for the capital, including preventing more than one million air pollution related hospital admissions over the next 30 years, saving the NHS around £5 billion.

It builds on the success of earlier standards and the central London Ultra-Low Emission Zone in improving London’s air quality. From today the new, tougher standards for construction machinery covered by the Mayor’s Non-Road Mobile Machinery Low Emission Zone will also be enforced.

Today the Mayor has published the latest in a series of reports evaluating the impact of the central London ULEZ. This report shows that, even throughout the pandemic, compliance with the ULEZ standards has remained high. Compliance with the ULEZ at the end of December 2020 was more than 90 percent for cars and 85 per cent for all vehicle types. This compares to 39 per cent compliance in February 2017 when the T-charge, the precursor to the ULEZ, was announced by the Mayor of London, and Londoners started preparing for the ULEZ.

Compliance with the ULEZ and LEZ standards has continued to grow throughout 2020 and it is clear that both schemes have been effective in accelerating the shift to cleaner, less polluting vehicles.

The report also shows that the scale of reduction in nitrogen dioxide (NO2) in central London in 2020 during the coronavirus pandemic was similar to the reduction driven by the Mayor’s air quality programme between 2017 and 2019. But the improvements due to ULEZ and other policies have been achieved without the profound curtailment of our lives seen during lockdown, showing that they are vital to the process of improving air quality and supporting a green recovery.

The Mayor of London, Sadiq Khan, said: “Toxic air pollution causes long-lasting harm and is a national public health crisis. In London it contributes to thousands of premature deaths every year. There is also evidence linking air pollution with an increased vulnerability to the most severe impacts of COVID-19. This new data shows that the action I’m taking is already making a difference and saving lives. These figures prove without a doubt that the Low Emission Zone and Ultra Low Emission Zone are accelerating the shift to cleaner vehicles.

“I’ve moved fast in London to implement the most ambitious plans to tackle air pollution of any major city in the world – showing what we can achieve if we are brave enough. The Government must take urgent steps to help clean up filthy air across the country, including with a new Environment Bill to give cities the powers and funding they need and making World Health Organization air quality guidelines legally binding targets to be met by 2030.”

Alex Williams, TfL’s Director of City Planning, said: “Toxic air in London is a blight on the city and we need to take bold action to clean it up. The introduction of these tighter standards for heavy vehicles and the expansion of the ULEZ will significantly reduce harmful emissions within the M25. We have been working closely with the freight industry to prepare them for the launch of a stronger Low Emission Zone. They have responded magnificently, showing their commitment to a green recovery, with the vast majority now meeting these world-leading environmental requirements.”