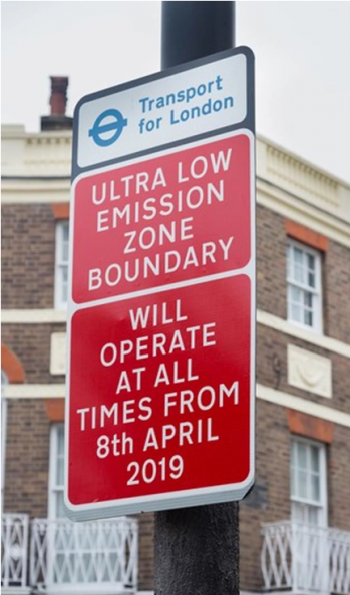 Expert Market, a leading comparison site for vehicle tracking system​s,​ has created a new infographic (reproduced below) which shows just how much the new ULEZ charge will increase the cost of driving through central London.

The Ultra Low Emission Zone, which comes into effect on 8 April this year, will penalise high-polluting vehicles*​ driving through central London. Using data from​  Transport for London and london.gov.uk, Expert Market ​ calculated how much​ businesses, commuters and residents will have to pay if their vehicles do not comply with the new ULEZ restrictions.

Cinderella Situation: Night Drivers Could be Charged Twice
Lorries, coaches and HGVs are the most heavily penalised vehicle type, paying up to £111.50/day for the privilege of driving in the ULEZ / congestion charge zone. To avoid hefty fines, fleet businesses with a large number of high-polluting, heavy-load vehicles should consider re-routing their drivers – or switching to vehicles that comply with emissions standards – before the ULEZ comes into force.

Unlike the capital’s congestion charge, which operates from 7am-6pm, the new ULEZ charge operates 24/7. Drivers are charged daily, from midnight to midnight.

For example, if night-time delivery drivers bring fresh groceries to businesses in the central zone at 11.45pm, but don’t leave until 12.10am, they will be charged twice. To avoid this double charge, fleet managers should consider altering rotas to allow deliveries to be made either side of the midnight cut-off.

The ULEZ holds motorcyclists to a higher emissions standard than other types of vehicles – despite the fact they actually emit less nitrogen dioxide. London’s couriers and gig economy delivery drivers will be hit hard by these stringent restrictions.

To avoid fines of up to £12.50 every day, drivers will have to invest in a newer vehicle, steer clear of central London, or work longer hours to cover their increased overheads.

It’s bad news for commuters driving to work in the ULEZ area. The new charge, paired with the congestion charge, will set workers back £120 / week if their vehicle is non-compliant. This is a sickening four times more than a return flight to Barcelona, which would set Londoners back just £30.

Though public transport in London is notoriously expensive, in this instance, making the switch to a weekly travelcard is a much cheaper (and more eco-friendly) way to travel to work. A zone 1-3 weekly pass costs £41.20 – around three times cheaper than driving into the central zone.

Lucy Crossfield of Expert Market comments: “Though ULEZ does present drivers and fleet businesses​ operating in London with extra costs, the desire to reduce pollution levels in the capital should not be scoffed at. Every day, Londoners are subjected to unacceptable levels of toxic air; the vehicles being charged through ULEZ are old and inefficient, and upgrading them – though costly – is, in the long term, better for individuals and businesses alike.”

“Unfortunately, it’s small businesses who can’t afford to upgrade heavy vehicles en masse that are likely to be hit the hardest. We’ve created this infographic to give businesses a clear idea of the costs they may come up against. If finances are an obstacle; careful route planning, good time management and swapping vehicles from diesel to petrol is advised.”