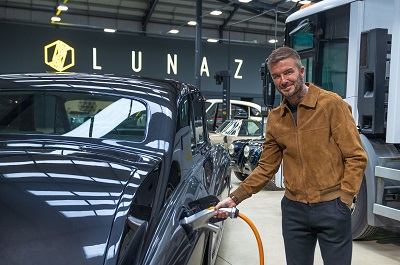 The firm, which is based in Silverstone, has received backing from a group of investors, which includes the former footballer, who has taken a 10% stake.

David Beckham says Lunaz represents the “very best of British ingenuity” in both technology and design. I was drawn to the company through their work restoring some of the most beautiful classic cars through upcycling and electrification.”

“David Lorenz and his team of world-class engineers are building something very special and I look forward to being part of their growth.”

The company established its reputation for vehicle electrification through its conversion of classic cars, bringing to market the world’s first fully electric Range Rover, Bentley, Rolls-Royce and Jaguar sports cars through its Lunaz Design brand. The 1961 Bentley Continental Flying Spur by Lunaz was awarded by BBC Top Gear in its ‘Electric Vehicle Awards’ issue.

David Lorenz, the founder and CEO of Lunaz, said: “The upcycling of existing passenger, industrial and commercial vehicles presents a sustainable alternative to replacing with new.

“Our approach will save fleet operators capital while dramatically reducing waste in the global drive towards de-carbonisation.

“There is evidence everywhere in the global economy that responsibility and commerciality are no longer mutually exclusive. This top tier investor commitment is testament to Lunaz’ path to defining the market for remanufacturing and conversion to clean-air powertrains.” 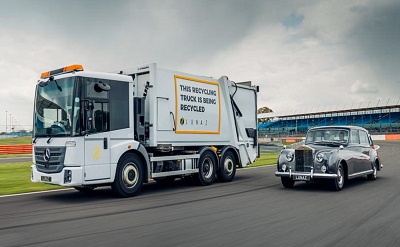 The company is aiming to start converting HGVs, classes 6, 7 and 8, including refuse trucks and fire engines, as it targets growth in the commercial fleet sector, claiming its remanufacturing and electrification process will save fleet operators “significant” costs compared with replacing existing vehicles with new.

For example, it claims a local authority could save more than 43% in the Total Cost of Ownership (TCO) of an upcycled and electrified refuse truck versus replacing their existing fleet with new equivalent electric vehicles.

The Lunaz proprietary powertrain has been developed under the technical leadership of managing director and technical lead Jon Hilton.

As a global leader in powertrain engineering, he has won three F1 World Championships with Renault as technical director and pioneered the use of hybrid technology from motorsport for mainstream industrial and passenger vehicles.

Jon Hilton, MD and technical director at Lunaz, said: “Our engineering is defined by a belief that a more sustainable approach should not come with a financial or functional penalty.

“An upcycled and electrified vehicle by Lunaz represents an extension of the usable life of diminishing resources and a commercially astute answer to the global rebalancing of fleets to clean-air powertrains.”

The Lunaz proprietary powertrain is modular in design meaning it can be applied to nearly every class, size and classification of vehicle.