Dacia has enhanced and updated its Duster SUV model. This latest version features refreshed design elements, up-to-date features, and technology all while continuing to offer the same robustness, comfort, and value-for-money which it is famed for.

Launched in the UK in 2013, and available across Europe since 2010, the Duster quickly earned a reputation for delivering all the benefits of an SUV at city car price. With shockingly affordable value, the Duster has shaken-up the SUV segment, having broken the rules to become a unique offering for consumers. With more than 1.9 million vehicles sold, the Duster has been the number one car for retail sales in its class in Europe’s SUV market since 2019.

Following on from earlier generations, the New Duster is aimed both at customers who are looking for a comfortable, attractive SUV and those who want a robust, versatile 4×4.

True to its heritage, the New Duster is still a family SUV with a trailblazer spirit. It is the companion for everyday use, but also for adventures in nature. Its captivating design has evolved, especially in respect of its lights and grille, which give it an even stronger personality, and improved CO2 efficiency.

Inside, it is fitted with a high centre console with a retracting armrest, offers two multimedia systems with a new 8-inch screen and is available with a dual-clutch automatic EDC gearbox. As versatile to drive as ever, the New Duster is available in two-wheel drive and four-wheel drive versions. The latest version boasts an enhanced 4×4 Monitor system.

Luke Broad, Head of Sales, Dacia UK said: “The New Dacia Duster is the perfect example of delivering the best-value-for-money without compromising on quality. The New Duster is a sporty, all-terrain vehicle which continues to make the SUV accessible for consumers. It now comes with even more advanced technology, features, style, enhanced driving pleasure and efficiency. Duster’s winning formula has made sure it has led its class in Europe’s SUV market since 2019, and with the New Duster and its unmatched combination of exceptional reliability, comfort and price, we only expect this to accelerate.” 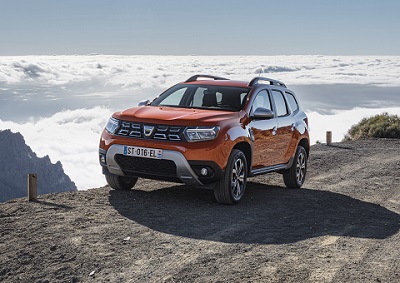 EXTERIOR DESIGN
Unveiled with the new Desert Orange bodywork, the New Duster has a more contemporary design. Not only is this evolution more stylish, but it has improved the Duster’s aerodynamic performance for greater efficiency.

The always-on lighting at the front and rear embody the new Dacia light signature, and the Duster is the first Dacia model to be equipped with front LED direction indicators. This technology is also used for the dipped headlights (with automatic main beam activation as standard), and the number plate lights. As well as lower electricity consumption, the LEDs offer brighter lighting, day and night, providing greater visibility for both the driver and other road users.

Thanks to the advanced expertise of Dacia’s innovative designers and engineers, the Duster’s aerodynamic performance has been improved. The design of the new rear spoiler and new 16 and 17-inch alloy rims have been put to the test in a wind tunnel. The set of CO2 optimisations (new wheel bearings and tires, LED lighting) including the drag area (SCx) allows a reduction of up to 5.8g of CO2 on the 4×4 version of the New Duster.

As well as the CO2 reduction, these features have also helped to deliver lower fuel consumption, providing another benefit for customers. 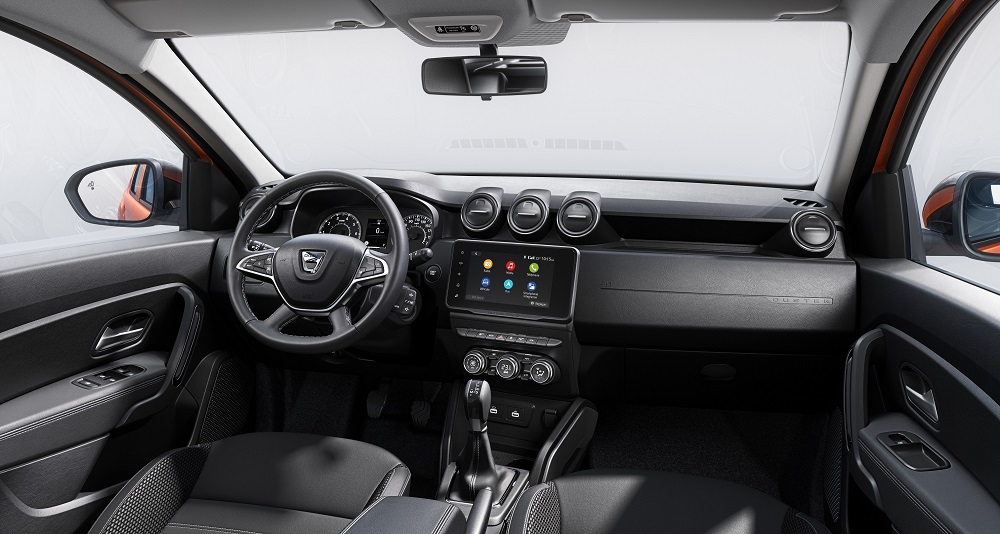 INTERIOR AND FEATURES
The New Duster improves the comfort of its occupants with a more inviting cabin. It is equipped with new upholstery, new headrests, and a high centre console with a wide retracting armrest. The New Duster also offers two multimedia systems with a new 8-inch touchscreen.

The upholstery for the seats on the New Duster is 100 per cent new, and the fabric and shape of the enhanced headrests offer improved ergonomics. The new, slim profile of the headrests improves the visibility in the passenger compartment for rear passengers looking to the front and vice versa.

A major new feature is the inclusion of a high centre console with a wide armrest that retracts 70mm. Available on selected models, it houses a closable, 1.1-litre storage compartment and two USB charging sockets for the rear passengers.

The comprehensive standard equipment includes an onboard computer screen, automatic main beam activation and cruise control and speed limiter with backlit controls on the steering wheel.

Automatic climate control with a digital display, heated front seats and a hands-free card are available on higher specification versions.

The New Duster is available with a choice of two new multimedia systems. In addition to the Dacia Plug & Music audio equipment (radio, MP3, USB, and Bluetooth), two new, user-friendly multimedia systems are available: Media Display and Media Nav. These are accessed through the new centrally mounted 8-inch touchscreen on the dashboard.

With Media Display, the equipment includes six speakers (two “boomer” speakers and two tweeters at the front), DAB radio, Bluetooth® connectivity, two USB ports, and wired smartphone replication compatible with Apple CarPlay® and Android Auto®. Specific controls on the steering wheel are used to activate voice recognition that allows the driver to control a smartphone iOS or Google assistant with their voice.

With Media Nav, the multimedia system is enriched by onboard navigation and Wi-Fi connectivity for Apple CarPlay® and Android Auto®.

The interface on Media Display and Media Nav has a Vehicle tab that is used to access economical driving information, and on the four-wheel drive version, the 4×4 Monitor which displays an altimeter, inclinometer, and compass information.

VERSATILITY
True to its heritage, the Dacia Duster is an dependable SUV for both every day and off-road use. Its high ground clearance, new tyres and specific 4×4 Monitor (on the four-wheel drive version) mean the Duster is at home on both the road and off the beaten track.

The New Duster is your everyday companion and continues to offer genuine all-terrain features, including:

The New Duster features a new type of tyre, no matter which version a customer opts for. The two-wheel drive version is fitted with ‘green’ CO2-optimised tyres as standard, giving a 10 per cent reduction in rolling resistance.

On the 4×4 version, the tyres meet the official 3PMSF requirements. The excellent grip that these provide means that winter tyres are no longer necessary.

The 4×4 version, equipped with Media Display or Media Nav, also includes a 4×4 Monitor system that sends various types of information to the centre screen:

After driving off-road or in the mountains, the 4×4 Monitor displays a summary log of the journey.

ENGINES
The Duster’s engine range has been completely renewed to combine driving pleasure with reduced CO2 emissions. The New Duster is now available with a six-speed automatic EDC (Efficient Dual Clutch) gearbox with the TCe 150 engine, while the capacity of the LPG tank on the TCe 100 Bi-Fuel version has been increased by 50 per cent, or 49.8 litres.

The two-wheel drive version of the New Duster now boasts a six-speed automatic EDC gearbox combined with the TCe 150 engine. It offers the comfort and pleasure of an automatic gearbox while keeping fuel consumption and CO2 emissions close to those of a manual gearbox.

The EDC gearbox has two clutches: one for the odd gears (1,3,5) and one for the even gears (2,4,6 and reverse). Gear changes are controlled via electric actuators which are, in turn, controlled by a computer that selects the ideal gear for the driver’s requests. During a gear change, the engaged clutch opens at the same time as the clutch of the next gear closes. Gear changes are quick and smooth, and the torque is transmitted continuously. No energy is lost and there is no engine stutter, resulting in greater efficiency and comfort.

The EDC system reduces the rotation of the engine by ensuring the vehicle is in the highest gear possible for a given speed, thus controlling fuel consumption and CO2 emissions.

The New Duster has a complete range of Euro 6D Full engines. The line-up includes:

Dacia is the only manufacturer to offer the Bi-Fuel (petrol-LPG) option across its entire range of internal combustion engine models. Factory fitting of this proven technology to the TCe 100 Bi-Fuel engine is a guarantee of safety and reliability. The length of the manufacturer’s warranty, the service intervals, and boot capacity are identical to the petrol-only version. The LPG tank is fitted beneath the floor of the boot, in place of the spare wheel.

When running on LPG, the New Duster Bi-Fuel emits on average 9.5 per cent less CO2 than an equivalent petrol engine. In addition, it offers a range of 767 miles thanks to its two tanks, with a combined supply of almost 100 litres. This is made up of 50 litres of petrol and 62 litre LPG tank (50 litre filling capacity). The useful supply of LPG has increased by 16.2 litres compared with the previous generation of the Duster LPG, increasing the range by more than 155 miles.

Behind the wheel, the switch between fuels is immediate and imperceptible. The new petrol-LPG switch, which is more ergonomic and better integrated, can be operated manually by the driver at any time. The switch to petrol occurs automatically if the LPG tank is empty.

The 3.5-inch TFT onboard computer screen informs the driver of the fuel level in the two tanks. With Dacia, LPG combines ease of use, driving pleasure and reduced CO2 emissions, with a greater range.

In addition to the cruise control and speed limiter, which is operated from the steering wheel, the New Duster is equipped with the latest-generation ESC as standard. There are also other key driver-assistance systems (ADAS) available.

The navigation screen displays one camera at a time. The camera changes angle automatically when a forward gear is engaged. The system is switched off when the vehicle’s speed exceeds 12mph or via the MVC key.