DriveElectric clean up the capital with Transport for London

Electric vehicle experts DriveElectric are working with Transport for London (TfL) to offer micro businesses and charities a switch to pure electric vehicles under the Mayor of London’s new Van Scrappage Scheme. A switch which could save businesses over £6.5k per van in costs annually, in addition to a grant of £6000.

Launched earlier this year for the Ultra Low Emissions Zone (ULEZ) in London, the Mayor of London’s Van Scrappage Scheme gives eligible drivers financial support to help them switch to a lower emissions model using grants of up to £6k per vehicle. Businesses can apply for the grants to scrap up to three older, more polluting, vans and switch to an electric van on offer from DriveElectric. The scheme could see DriveElectric put over 200 electric vans into the capital, taking over 2 million polluting miles off London’s roads each year.

Anyone driving into London’s ULEZ every working day with an older diesel van faces a bill of £480 each month for congestion and ULEZ charges, however if they choose to scrap the vehicle it will be replaced by a pure electric Renault Kangoo ZE Maxi van on a lease costing £99 (+VAT) per month, which is free from ULEZ or London Congestion Charges.

Based on a diesel van driving into central London five days a week, paying ULEZ and Congestion Charges, plus costs for an annual 6k mileage fuel use, experts at DriveElectric have worked out that switching to an electric van will save businesses over £6.5k annually, per van*.

This isn’t the first time DriveElectric has worked with the Mayor of London.  DriveElectric provided Gnewt, a growing last mile delivery service, with a bespoke, 100% electric fleet for their London operations.  Gnewt’s fleet of 125 electric vehicles is now London’s largest fully electric delivery fleet, travelling over 1 million emission free miles in London each year. The project was so successful that it attracted funding from the Mayor of London for a commercial electric vehicle trial.

DriveElectric is an independent UK based electric vehicle specialist with over 20 years leasing, and 10 years electric vehicle experience, indeed the company funded the UK’s first Tesla Roadster in 2008.

Mike Potter, MD of DriveElectric explained more about the company’s work with TfL: “Since we started working with electric vehicles in 2008 we constantly look for ways to drive the agenda on air quality. We have worked closely with Transport for London, giving impartial advice and working towards a low carbon transport future for the capital.  Reducing vehicle emissions should be high on everyone’s agenda.  It is so important to get as many zero emission vehicles on our roads as possible and it is now achievable.  The Mayor of London’s van scrappage scheme will help us bring more fully electric vans within easy and affordable reach of thousands of businesses across London.

With this initiative’s support it’s now possible for us to provide vehicles to London businesses from under £100 per month. The savings in fuel, vehicle maintenance, Congestion and ULEZ charges already combine to make going electric in London an irresistible proposition. With the additional support of the van scrappage scheme we hope more and more businesses will agree it’s time to go electric ”

More than 276,000 diesel van drivers are estimated to be affected by London ULEZ charges. The zone is currently operational in the centre of London but by 2021 will be extended to all roads between the North and South Circular. 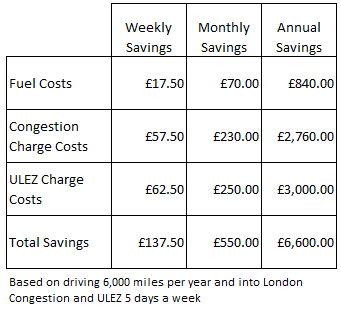