2019 ended on a positive note, as used car prices increased The average price of a used car in December was £13,542 up from £12,976 in December 2018, reveals the Auto Trader Retail Price Index. After removing the impact of stock mix (changes in the types of vehicle entering or leaving the market), on a like-for-like basis prices contracted by -3.3%.

Despite the second half of 2019 proving challenging for the industry, the year overall ended with like-for-like price growth increasing by 0.6% when compared to 2018, meaning the average price of a used car was £12,800.

Demand for electric vehicles (EVs) increased in December, as measured by search behaviour on Auto Trader, by a healthy 78% when compared to the same period in 2018. Supply of EVs increased too, almost tripling at 167%, as measured by the volume of stock advertised on Auto Trader. A similar trend was observed for the wider alternatively fuelled vehicles (AFVs) category – which includes EVs. Demand increased by over a third in December (38%) vs. December 2018 and was met with an increase in supply of 74%.

Despite supply growth outpacing demand in December, there is still an overall imbalance. EVs and AFVs share of search is still much higher than its share of stock. AFVs and EVs only account for 3.4% and 0.5% of total stock on Auto Trader’s marketplace respectively, but AFVs now account for 9% of all searches conducted by fuel type. This is the highest share of search for AFVs on record – increasing from 8% in November 2019. The supply shortage has ensured prices remain high, with a like-for-like increase of 2.6% year-on-year for AFVs and 12.9% for EVs.

The difference in average asking prices between internal combustion engines (ICE) and AFVs also continues to grow, increasing by 11% year-on-year. Petrol cars continue to be most popular, with 49% share of search (down from 50% in November) while diesels account for 42% (no change on November). 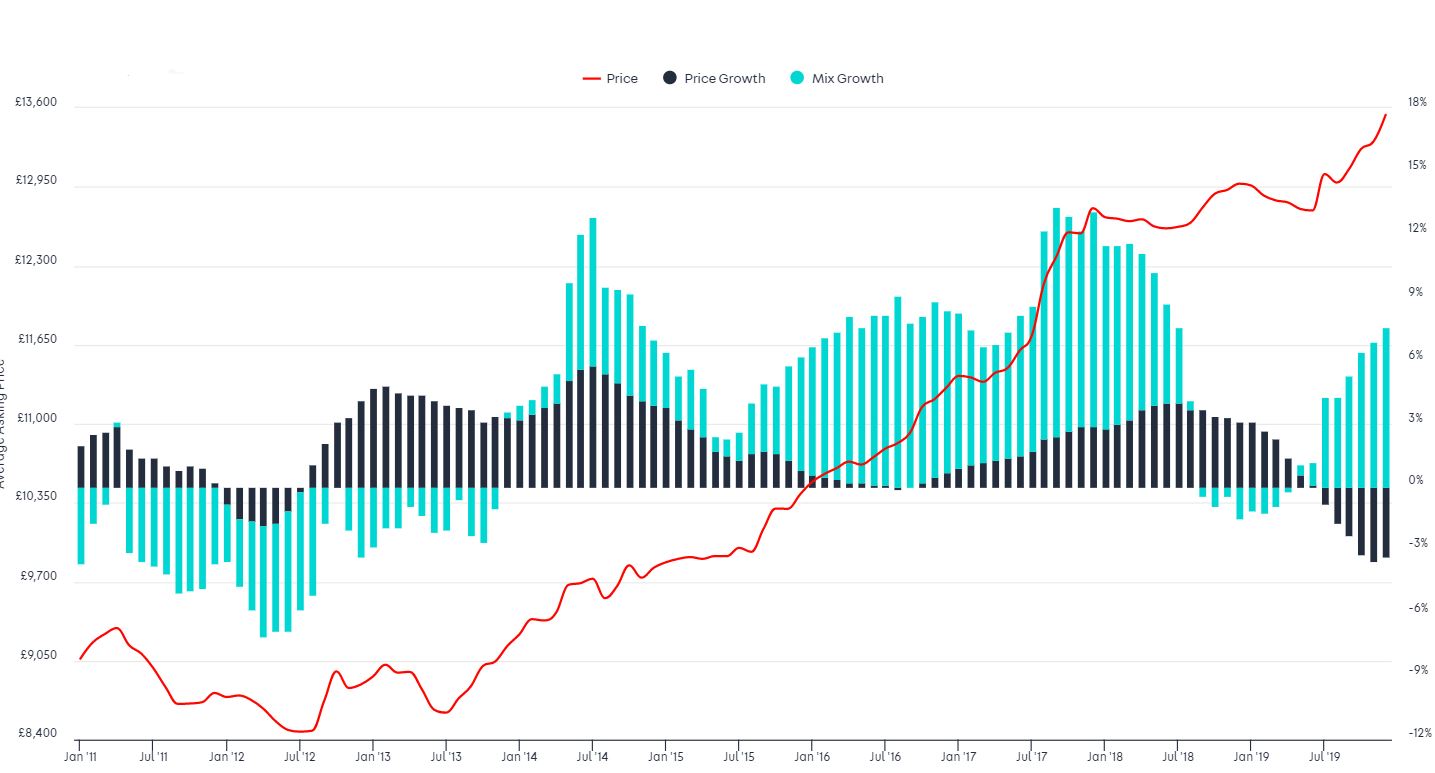 There’s been an uplift in the volume of premium brand vehicles on the marketplace in December, increasing by 9.2% compared to the same time in 2018. Demand for these cars is also up by 15% year-on-year, a trend mirrored in actual new car sales last year, as reported by the SMMT. However, like-for-like prices of these cars contracted by 2.2% year-on-year. Despite the dip the segment is still fairing more favourably than the overall market average.

Higher consumer interest in SUVs has also been observed across Auto Trader in December. Searches for these vehicles increased 9% year-on-year. However, supply is outstripping demand as volumes of SUVs on Auto Trader increased by 14.6% in the month. This could have been a contributing factor to the like-for-like price dip of 4.4%.

When comparing ages of SUVs, like-for-like prices fell as the age of SUVs increased. This suggests that older cars of this body type don’t hold their value as well as younger models.

Ian Plummer, Commercial Director at Auto Trader, explains, “Lower consumer confidence, global economic uncertainty, as well as the adjustment of market values all proved challenging for the industry in 2019. But despite the tough environment, the used car market has shown its resilience as transactions remain stable, and prices held up over the year. With greater certainty following the General Election result in December, we are optimistic for a more positive outlook for 2020.

“There are some really positive trends to draw out in the market – continued strong performance of the premium segment, growing consumer interest in SUVs and the continuing rise of AFVs. AFVs and zero emission vehicles have grown in popularity over the last year and looking ahead, with the ongoing rhetoric around emissions and climate change, we expect this to continue on its upward trajectory. With 24 new EVs coming into the market in 2020, we may well see older models become more affordable in the used market soon.”