UK new car market stable in February, as EVs shift up a gear

The UK’s new car market enjoyed marginal growth in February, up 1.4% following five straight months of decline, according to the latest figures released today by the Society of Motor Manufacturers and Traders (SMMT). 81,969 new cars were registered on UK roads in the month (a year on year uplift of 1,164 units), traditionally one of the quietest of the year, ahead of the crucial March plate change.

Demand for alternatively fuelled vehicles continued to surge, up 34.0% and marking the 22nd consecutive month of growth for the segment as new and existing cutting-edge models attracted buyers into showrooms. Registrations of zero-emission electric cars enjoyed particular growth, more than doubling to 731 units, although they still accounted for less than 1% of the market (0.9%).

Meanwhile, in the four months since the October 2018 reform to the Plug-in Car Grant, the market for plug-in hybrid electric vehicles (PHEVs) has only grown by 1.7%, compared with 29.5% over the first 10 months of 2018.1 This suggests that removing the incentive for PHEVs is having an adverse effect.

Mike Hawes, SMMT Chief Executive, said, “It’s encouraging to see market growth in February, albeit marginal, especially for electrified models. Car makers have made huge commitments to bring to market an ever-increasing range of exciting zero and ultra low emission vehicles and give buyers greater choice. These cars still only account for a fraction of the overall market, however, so if the UK is to achieve its electrification ambitions, a world-class package of incentives and infrastructure is needed. The recent removal of the plug-in car grant from plug-in hybrids was a backward step and sends entirely the wrong message. Supportive, not punitive measures are needed, else ambitions will never be realised.”

The news comes as vehicle manufacturers prepare to launch some 14 all-new electric and plug-in models to a global audience at the Geneva Motor Show today. Already there are around 40 plug-in models on the market in the UK, with more than 20 more expected to arrive in showrooms in 2019.

“It is also encouraging to see levels of demand for AFVs continue to rise as consumers recognise the benefits from a cost-saving perspective and prepare for incoming Government initiatives such as Clean Air Zones in 2020.

“Overcoming barriers to adoption will remain a determining factor for the AFV market in the UK. Our latest research found that 78% of people believe that vehicle emissions are a significant problem in the UK, highlighting the strong potential for AFV growth throughout 2019.

“Interestingly, our research found that more than half (57%) of consumers do not know what a Clean Air Zone is, suggesting there is still significant progress to be made to inform consumers of the initiative.” 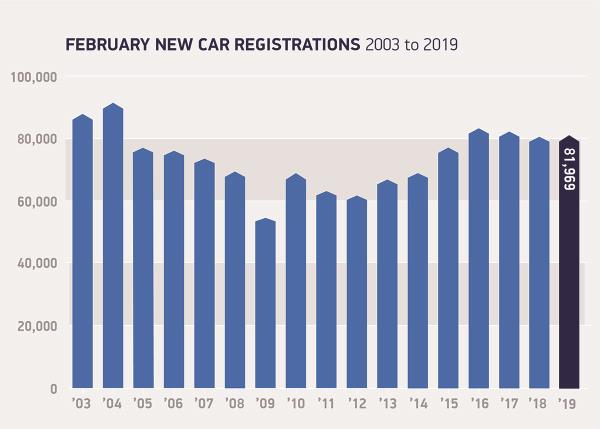