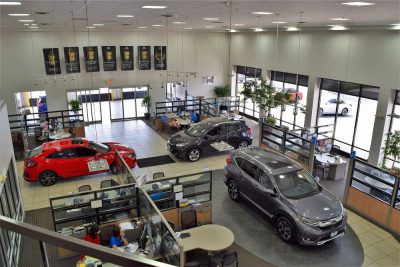 “However, alternatively fuelled vehicles have continued to gain increasing share of the market as consumer adoption continues apace. Sales of electric increased by 243.1% this month, with PHEVs and HEVs each seeing month-on-month growth of 49.9% and 71.9%.

“This year, we expect to see further restructuring of the market, as 52% of UK consumers would consider hybrid or electric as their next vehicle purchase.

“Whilst the inclusion of hybrids in the UK’s incoming ban on new petrol and diesel car sales from 2035 could slow demand in the longer term, sales in February appear undented. For now, hybrids continue to been seen as a stepping stone to going fully electric.

“The key to maintaining growth of EVs will be investment in the supporting infrastructure. Where consumers were once deterred by battery range anxiety, this has now shifted to charging anxiety with access to charging now being seen as the biggest barrier to buying a full EV for UK customers.

“Manufacturers are doing their part by bringing new models to the market and adding range to batteries. What consumers need now is clarity on joined-up, long-term infrastructure development and continued financial incentives could be key to future EV growth.”

David Leggett, Automotive Editor at GlobalData, a leading data and analytics company, offers his view: “We are about to see many more electrified vehicles available on the UK new car market. In 2020, manufacturers will bring more than 23 new battery electric and 10 plug-in hybrid electric cars to the UK to add to the more than 65 already on sale. However, high electric vehicle purchase prices and the poor provision of charging infrastructure threaten continued low market penetration rates.

“It is vital for the UK automotive industry that it is part of the oncoming electrification wave, supported by buoyant sales of EVs in the home market.

“The SMMT’s suggestion to remove VAT on electric cars is certainly worthy of serious consideration as it would cut the purchase price of a typical electric car by as much as £5,600 and we know that relatively high purchase prices are acting as a disincentive for car buyers to purchase electric vehicles.

“The rapid decline of diesel in the UK marketplace – down from half of the market to around a fifth – also creates an opportunity to stimulate sales of plug-in hybrids which would help the market adjust to electric drive usage. Even more importantly, it would reduce the average CO2 emissions contribution from new cars sold in the UK – which has been rising in recent years, a worrying trend given the UK Government’s highly ambitious CO2 targets.

“The long term continuation of the UK’s plug-in car grant at current levels and its reintroduction for plug-in hybrids also makes a lot of sense if a realistic pathway to no fossil-fuel burning cars on sale by the deadline of 2035 is to be achieved.”

Jon Lawes, Managing Director, Hitachi Capital Vehicle Solutions reacts to SMMT car sales figures: “February was another strong month for battery electric and hybrid electric vehicles, with year-on-year registrations up 243% and 71.9%, respectively. Whilst both vehicle types account for only 8.4% of the overall market, these figures illustrate that consumers and businesses are becoming increasingly confident about the options available, with an additional 33 battery electric and plug-in hybrid electric models expected to be introduced during 2020.

“With February typically being one of the quietest months for new car purchases, the month-on-month decline of -2.9% for new car registrations will not raise too many eyebrows, especially with new number plates expected to boost sales next month.

“The industry will be eagerly anticipating the Government’s Spring Budget next week, where further measures to support the transition to zero-emission vehicles are expected to be announced. As SMMT calculations have shown, the removal of VAT on electric and hybrid vehicles is one step that could support this transition, however, for any solution to be effective, clarity on considerations including Clean Air Zones, infrastructure investment and plug-in car grant incentives will also be pivotal to help achieve the UK’s zero emission targets.”