The UK new car market remained steady in August, with just 1,521 fewer cars registered than in the same month last year, according to figures released today by the Society of Motor Manufacturers and Traders (SMMT). Registrations fell by -1.6% in what is typically one of the smallest months of the year, as falling demand for diesel and plug-in hybrid vehicles continued to impact the overall market.

Registrations from both the private and fleet sectors declined in the month, down -1.7% and -3.5% respectively, as demand in the small volume business segment increased by some 962 units. Meanwhile, diesel registrations fell for the 29th month in a row, though at a slower pace than recently experienced (-12.2%), while petrol demand remained stable, up 1.0%. Zero emission cars saw the biggest percentage growth, up 377.5%, to 3,147 units as new models and some pent up demand boosted registrations, while 4,014 hybrid electric cars also joined UK roads, an uplift of 36.2%. However, the decline in plug-in hybrid registrations continued, down -71.8% to just 907 vehicles.

UK new car buyers can now choose from a huge range of technologies to suit their lifestyles and driving needs. In addition to the cleanest-ever petrols and diesels, the UK’s alternatively fuelled offering now includes some 27 hybrids, 27 plug-in hybrids, and 24 zero emission battery electric and hydrogen models. Exciting new powertrain technologies, the result of massive manufacturer investment, are now rapidly coming to market – with the range set to almost double over the coming year. However, with demand still lagging behind ambitious government targets, it is clear that much more needs to be done, and quickly, to address consumer concerns over cost and infrastructure to make this emerging technology more accessible.1

Mike Hawes, SMMT Chief Executive, said, “August is typically the new car market’s quietest month so the huge increase in EV registrations is very visible but especially welcome. It’s great to see consumers respond to the massive industry investment made over many years. While this is encouraging, these figures also show the scale of the challenge ahead. It’s a long road to zero and while manufacturers can deliver the technology, they can’t dictate the pace of uptake. To support a smooth transition and deliver environmental gains now, we need a long-term government commitment to measures that give consumers confidence to invest in the latest technologies that best suit their needs.”

Michael Woodward, UK automotive lead, Deloitte, said: “Car sales declined by -1.6% this month compared to the same time last year. Given that August is usually one of the quietest months for car sales and the uncertain economic climate, the industry will be encouraged to see the market more stable than expected.

“However, this masks a significant change in the type of technology preferred by consumers.

“Electric vehicle (EVs) popularity continues to accelerate with significant growth experienced year-on-year (+378%). As investment in infrastructure is made and more models enter the market, we expect this sector to grow further. This month’s significant increase in EVs reflects an increasing confidence in the technology and poses the question if we are closer than we think to the ‘tipping point’.

“The long-term decline in diesel car sales means that problems are mounting up for manufacturers and their partners. For example, as sales continue to decline, the industry is having to manage a surplus stock of new and used cars.

“Despite an encouraging month, there are potential headwinds. The value of the pound against the euro has fallen by -16% over the past three years, including a decline of -5% in the last six months. So far, the consumer has been shielded from price rises associated with currency fluctuation, but if the pound continues to decline, manufacturers may be forced to pass on the costs to consumers. If they do this at a time of surplus stock in used cars, this could put a huge dent in demand.”

“Overcoming obstacles to the commercial adoption of alternatively-fuelled vehicles (AFVs) will be critical to build and accelerate momentum as we head in to 2020. There is a supply challenge to overcome around availability of fully electric vehicles but the appetite from consumers is certainly there, proven by Hitachi Capital UK’s latest research that found a 62% majority of consumers supporting the move to electric.

“As well as reviewing policies and purchase incentives for AFVs, commercial electric vehicle trials, such as Optimise Prime, will be an important part of addressing shortcomings in charging infrastructure and encouraging investment.”

Last year, registrations were unusually high primarily due to the Worldwide Harmonised Light Vehicle Test (WLTP) that came into effect in September and pushed consumers to bring forward their new car purchases. On 1 September 2019, the Real Driving Emission (RDE) regulation came into force to complement WLTP.

Robinson continued, “Although the introduction of the new Real Driving Emission testing from September should not have as strong effects on the market as WLTP last year, especially thanks to the one-year derogation granted by the Government*, the market may remain slightly distorted over the next months.

“Positively, sales of pure electric vehicles continued to rise: franchised retailers are making important efforts and investments to meet the fast growing consumer demand for EVs despite supply constraints. There are attractive deals on the market for vehicles of all fuel types, but the current, uncertain political climate undermines consumer confidence.

“NFDA will continue to support franchised retailers during the important plate-change month of September”. 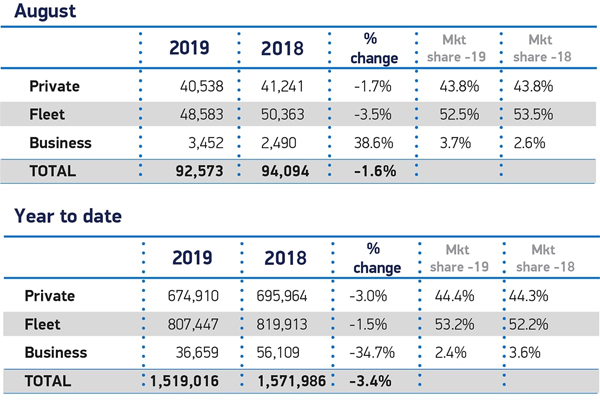 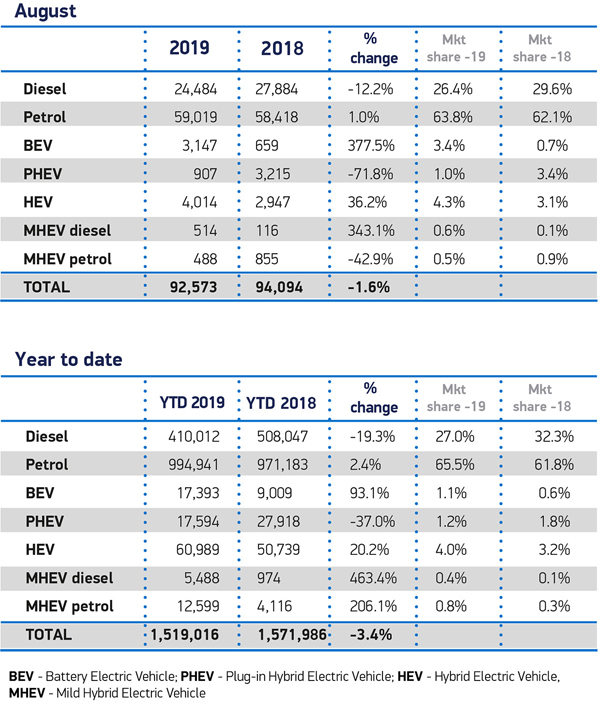 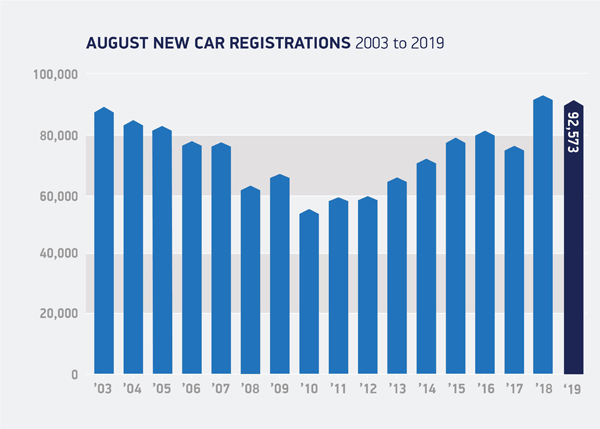