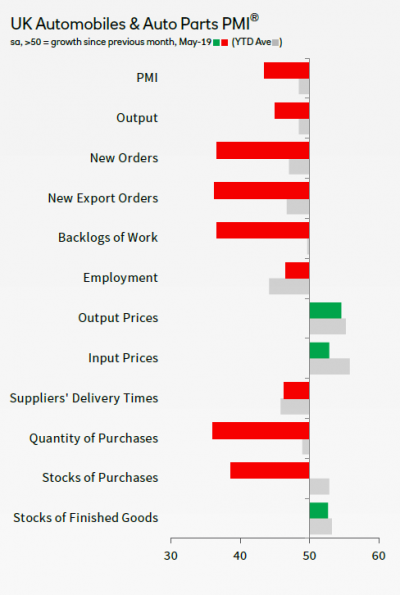 Today sees the release of the new NatWest UK Automotive PMI® report. The survey, produced in partnership between NatWest and IHS Markit, is based on responses from UK automotive sector manufacturers and benchmarked against equivalent indices for Europe and the rest of the world.

At 43.5 in May, the headline seasonally adjusted UK Automobiles & Auto Parts PMI® – a single figure measure of developments in manufacturing conditions – registered below the crucial 50.0 no-change threshold for the second month running. The latest figure was down from 48.9 in April and signalled the sharpest downturn in business conditions across the UK automotive sector for six-and-a-half years.

Aside from a brief upturn during March amid a Brexit-related surge in production volumes and stockpiling, the index has signalled softer operating conditions in each month since June 2018.

The downturn in UK automotive sector output, order books and employment in the second quarter of 2019 has been amplified by a payback from extended production schedules in March. Survey respondents widely commented on softer domestic demand following production stoppages at volume manufacturers and a reversal of stock building across the supply chain.

Looking through the noise of unseasonal production shutdowns, the recent PMI figures indicate the worst period of underlying demand since late-2012. Export sales were especially subdued in May, with automotive sector manufacturers pointing to the steepest drop in new orders from abroad since April 2009.

Comparisons of the UK Automobiles & Auto Parts PMI data against international benchmarks illustrate that manufacturers have faced declines in order books of a similar scale to those seen across Europe and further afield.

A wider set of challenges are holding back the automotive sector, which are systemic in nature and global in scope. In fact, the Global Automobiles & Auto Parts PMI figure for May was the lowest since February 2013 and the weakest of all sectors monitored by the IHS Markit data.

Major geopolitical disruption in the form of US-China trade frictions and the prospect of new tariffs has rippled through international supply chains. A subsequent rise in risk aversion and lower appetite for capital spending has added to industry-specific challenges for automotive manufacturers.

Survey respondents to the Manufacturing PMIs across the world overwhelmingly cited trade uncertainty as a threat to the business outlook in May. Disruption from global trade frictions adds to the challenges faced by global automotive producers from new diesel regulations, transition to electric vehicle production and subdued consumer demand in key markets such as China.

Despite the current malaise across the global automotive sector, the economic impact of UK-based light vehicle manufacturers has expanded strongly over the past decade. In fact, NatWest’s UK Regional PMI® surveys  illustrate that the recovery in automotive production has been a key factor behind rising order books, employment and productivity across the North of England, Wales and the West Midlands in recent years.

The contribution of vehicle sales to UK goods exports still stands at an elevated level, which has helped to boost growth across the  domestic supply chain. We estimate that the automotive sector’s employment footprint accounts for more than 40% of the manufacturing workforce in several local authorities, and the majority of these are in the West Midlands region. In fact, the West Midlands accounts for one-in-three manufacturing jobs in the automotive sector.

“The challenge for the UK automotive sector is to chart a course through the intense industry headwinds that are so clearly evident in the report findings. At NatWest, where we are committed to playing our role to support the automotive sector, we believe that new collaborative models hold the key to success.

“At this critical juncture for automotive sector growth and investment, we must accelerate efforts to collaborate across the critical elements of the auto sector ecosystem – OEM’s, supply chain, policymakers, investment and finance communities.

“These connections will help ensure that the UK can deliver the industrial capacity, infrastructure and regulatory framework to maintain and build on its leading role in the future global automotive sector ecosystem.

“The prevailing malaise will eventually be seen as a cyclical issue for automotive manufacturers, albeit a slowdown that has taken hold more quickly and become more widespread internationally than first anticipated.

“We have seen the softening of automotive demand amplified by an escalation of policy uncertainty worldwide. Most notably, diesel emissions regulations, changes to the planned speed of transition to carbon neutrality in Europe and new US-China trade tariffs.

“The resilience of the UK automotive sector is well proven, with a track-record of leading routes to recovery and advancement. Manufacturers have faced and overcome ‘perfect storms’ before, most recently in the wake of the 2008/09 global financial crisis. The current storm is as significant with different factors at play therefore requiring new and innovative solutions.

“The coming global shift towards electric powertrains is opening up huge rewards for value creation across the supply chain, while the technologies underpinning the future of mobility may create new geographic hubs for industrial innovation.

“It is my firm belief that the UK is well placed to thrive in an environment of technology-driven automotive trends, but we must act fast and think collaboratively to maximize the opportunities ahead.”

“Across the world, the automotive industry is facing a range of distinct headwinds, each of which is weakening consumer demand for cars. In addition to ‘dieselgate’ there was the introduction of a more rigorous emission testing procedure plus growing unease about the direction of the global economy. An unhelpful combination sowing further consumer confusion about their outlook for personal finances and the future of cars.

“Because adding to these ‘one-off’ or cyclical factors, the sector is also undergoing a period of profound structural change, driven by developments in automotive technology, automation and shifts in consumer preferences. While vehicle production and sales are down, registrations of Electric and Alternative Fuel Vehicles increased by 13.8% in the year to May, reaching a 6% market share. And while 72% of us now drive, more than ever before, we’re driving less (1,400 fewer miles each year on average) compared with 2003.

“While factors such as uncertainty will eventually clear, others are trends set to shape the industry for years to come. The sector currently plays an important role in the UK economy. Transport manufacturing added £15.4 billion to UK GVA in 2018, or 0.8% of the total. Nearly 190,000 people are directly employed in manufacturing, with almost 0.9m across the whole industry.

“It’s productive work too. Automotive jobs created £51 for every hour worked in Q4 2018, almost £16 more than the average. Few industries outside Finance, IT and heavy industry add more value per hour. It invests heavily, especially in the critical innovation-augmenting assets such as R&D. The transport sector contributed 15% of UK businesses R&D investment in 2017, or £3.6bn. That’s a 191% increase since 2010.

“So, while the sector’s current weather is indeed gloomy and the UK’s place in this evolving automotive landscape is not yet set, at least the foundations are good.”

“What we are experiencing in asset finance, whether this is through our funding of business customer fleets, unit stocking for dealers or support for our rental and contract hire customers, suggests we may in fact be experiencing the start of an evolution – driven by the electric vehicle.

“We are teetering on the edge of the ‘first to move’ precipice. Ultimately, while we are seeing the demand and desire for electric vehicles begin to grow, consumers and businesses are hesitant to take the plunge and make the purchase. This stems from the speed at which the technology is improving – what may be the best-in-class electric vehicle today may very quickly be outdated in just a matter of months.

“This hesitancy is contributing to the industry downturn highlighted by the report. However it won’t last forever; in fact, people are already starting to make the leap. There has also been a huge increase in the number of pure-electric and plug-in hybrid models available in the UK with many of the top manufacturers in the UK now offering a number of EVs as part of their model range.

“Our front-line feedback is that as the electric vehicle becomes more common place, and the young people of today become the vehicle purchasers of tomorrow, British manufacturers must ensure they are best placed to capitalise on the opportunity.”