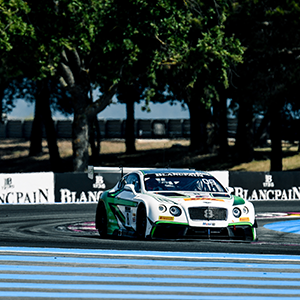 The six-hour Blancpain GT Series race took place from 18:00 until midnight on the world-famous track in the south of France and Bentley Team M-Sport once again ran its pair of Continental GT3s.

After qualifying in eighth position on a grid of more than 50 GT3 cars, the #8 Continental GT3 climbed steadily to the lead, where it ran for most of the race. With consistently quick lap times, impeccable pit stops and a reliable car, the team had what Bentley’s Director of Motorsport, Brian Gush has called a “perfect race”.

“It’s always great to take a race win but when you do it so cleanly it makes it all the more rewarding,” commented Gush. “It was a perfect race for the number eight crew, after many months of extremely hard work by the whole team. In the last two weeks, Bentleys have won both races in the UK, Europe and the USA, which is a testament to the car and the people behind it. We must now retain our focus as we look ahead to the next race, which is the most challenging of the Blancpain season – the Spa 24 Hours.”

The sister #7 Continental GT3, however, fell foul of bad luck. Guy Smith (GB) ran as high as third before a technical gremlin prevented the result that he, Oliver Jarvis (GB) and Steven Kane (GB) deserved, and after five and a half hours the British trio was forced to retire.

The race win, which carries 33 championship points, catapults Soucek, Soulet and Abril in to the lead of the Blancpain GT Endurance Cup going into the most important GT3 race of the series at Spa-Francorchamps on 29th July.

Victory and Double Podium in the USA

As Soulet, Soucek and Abril sprayed the Champagne on the top step of the podium, across the Atlantic ocean Adderly Fong (HK) crossed the line of race one in Pirelli World Challenge at Road America in first place in his #88 Bentley Team Absolute Continental GT3. Fong put in a dominant performance after starting on pole and fighting off challengers to retain the lead throughout the race, scoring his first victory of the year for the team and his first win in the American series.

On Sunday afternoon, Fong took second place in race two, having battled for the lead for the duration of the 50-minute sprint, and ultimately finishing just 0.239 seconds behind the winner. Fong’s double podium means the most successful American race weekend yet for Bentley Team Absolute.