Bentley At Goodwood Festival Of Speed 2017 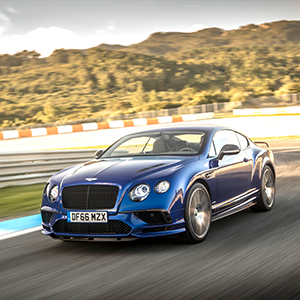 Bentley Motors returns to the Goodwood Festival of Speed this month, with the UK debut of the Continental Supersports alongside a powerful display of new Bentley models for the road and track.

The Festival of Speed – known as the world’s most glamorous motorsport garden party – will form the backdrop for an impressive line-up of award-winning new Bentley models. The festival runs from June 29 to July 2.

The exciting new Continental Supersports captures this year’s Festival of Speed theme, “Peaks of Performance”, perfectly. The model will be shown for the first time in the UK at Goodwood where it will be driven up the historic hillclimb by Derek Bell, renowned Le Mans champion and Bentley Boy. With its purposeful appearance, the world’s fastest four-seat car – and Bentley’s most powerful production car yet – is a true game changer, accelerating to 60 mph in 3.4 seconds.

Also going up the hillclimb will be the Bentaya, the world’s most powerful and most exclusive luxury SUV.

Joining a second Continental Supersports on Bentley’s stand at the Festival of Speed will be the Mulsanne Extended Wheelbase. Designed for customers with a preference for being driven, the Extended Wheelbase offers a first-class air-travel experience for the road.

The 250 mm extension of the Mulsanne’s wheelbase is entirely to the benefit of rear-seat passenger legroom. To make the best use of the additional rear legroom, Bentley has developed airline-style electronic leg rests which are integrated into the bases of the two rear seats. These extend outward and pivot, affording rear-seat passengers the luxury of choice between upright, relaxed and reclined seating positions.

The new Bentayga Diesel will also be on display, with its combination of go-anywhere four-wheel drive, luxurious handcrafted cabin and new, triple-charged 4.0-litre diesel-powered V8 engine.

It will be joined by the Flying Spur V8 S, a more performance-orientated version of the Flying Spur, with an uprated twin-turbo V8 engine delivering 528 PS (521 bhp).

Away from Bentley’s main stand, the victorious Speed 8 Prototype race car will be on display in the paddock area. This car debuted at the Le Mans 24 Hours in 2001, winning the famous endurance race in 2003 with Tom Kristensen behind the wheel.

As well as offering a fantastic spectacle, the car that marked Bentley’s return to racing after a 73-year absence will form a celebration of 20 years of racing at Le Mans for Kristensen, as well as a nod to the legendary driver’s 50th birthday.

Visitors to Bentley’s stand over the Festival of Speed weekend will also be invited to watch demonstrations by the craftsmen from Crewe. As well as an introduction to Mulliner, the Bentley’s bespoke commissioning division, guests will be able to observe craftsmen from the woodshop and trim departments, designing and making interior elements, using the finest quality leathers and woods.