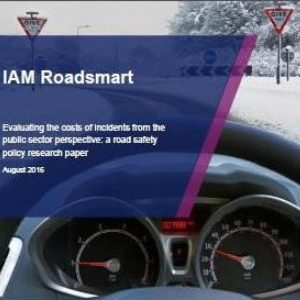 Action is needed from across government departments to reverse the trend of flat-lining road deaths, according to new research from UK road safety charity IAM RoadSmart. And reducing these deaths would in turn offer a large saving to the public purse.

The new report, Evaluating the costs of incidents from the public sector perspective, is the first attempt to update the formula for death and injury cost figures since the 1990’s. It is also the first time anyone has highlighted the costs to the public sector of crashes involving some of the highest at-risk road user groups: young and mature drivers, people driving for work and motorcyclists.

The purpose of the research was to facilitate a discussion beyond the Department for Transport, with the aim of developing focused policy actions based on the savings government departments could make by prioritising road safety in their day-to-day work.

The use of casualty costs is well known and a new figure is generated every year based on a model developed in the 1990’s. In 2015 the cost of each casualty was estimated at £1.7million with the total of all incidents placed at £35 billion. The biggest element in this figure is the cost to the individuals involved, chiefly loved ones. This human cost factor has always been based on how much those relatives would be willing to pay to avoid the incident. By stripping this out the new report can show exactly which costs fall on the public purse.

The total costs to public services identified by the research were as follows:

Breaking this down to individual government departments shows that reducing young driver crashes completely could result in savings of £227 million to the Department for Work and Pensions – a result of not needing to pay out long term benefits to injured drivers. In turn, the NHS and the police costs would be cut by £241 million. For motorcycling the DWP benefits savings are up to £219 million and NHS and police costs could be reduced by up to £162 million.  For older drivers the costs are actually higher for serious injuries at £58,000 but the ever increasing numbers of older people mean that their costs to government departments cannot be ignored.

Sarah Sillars, IAM RoadSmart chief executive officer, said: “These are huge savings and against a background of austerity and public spending cuts this report shows what could be achieved by reducing the numbers of deaths and serious injuries suffered by these at-risk road users.

“When it comes to road safety the Department for Transport tends to be seen as the main provider of solutions, but the costs of these tragic incidents are felt right across government, not least within  the NHS, Department of Work and Pensions and the Home Office. More cross-departmental working, pooling of resources and sharing of knowledge is key to ensuring joined up thinking on road safety.