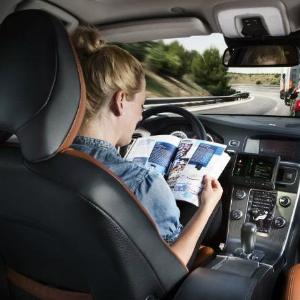 The latest survey* from Venson Automotive Solutions reveals people’s attitudes to driverless cars and road safety, with 55% calling for a review of road traffic laws in line with the rise of automated vehicles.   This new insight comes ahead of Brake Road Safety Week 2016 (21-27 November), which focuses on the theme of ‘Make the Brake Pledge’, urging motorists to slow down, stay sober, secure, sharp, silent and sustainable. Venson supports Road Safety Week and raises awareness of the potential safety benefits autonomous vehicles offer.

According to the Society of Motor Manufacturers and Traders (SMMT) serious road accidents could fall by more than 25,000, saving 2,500 lives every year as a result of driverless technology in 2030. However, Venson’s survey reveals that only 20% of people understand the true safety benefits of autonomous vehicles, with 53% thinking the SMMT figure would be more like 10,000, saving just 1,000 lives.

When asked who should be liable, in the event of an accident by a driverless car, 22% said the remote vehicle operator, with only 12% saying the driver. However, an overwhelming majority (44%) said it should be a combination of the driver, remote vehicle operator, vehicle manufacturer and the software or hardware developer, highlighting their recognition of the complexities of automated vehicles and liability.

“It’s clear that many people aren’t aware of the positive impact autonomous vehicles are expected to have on road safety in the UK, despite the fact that 94% of road accidents are caused by human error,” explains Simon Staton, Director of Client Management at Venson Automotive Solutions.  “Highways England believes that “connected and autonomous vehicles could be the breakthrough innovation that’s needed to achieve the 2040 safety ambition of reducing accidents down to, as close as possible, zero**.  Only 30% of our respondents believed this target achievable, with 38% predicting injuries and fatalities will halve.”

One thing people largely agree on is that existing laws won’t be sufficient, once automated vehicles are commonplace. Only 10% think current laws would suffice, whilst 55% think there should be a review of road traffic laws.   Simon Staton concludes, “The ‘Make the Brake Pledge’ urges drivers to minimise the risk of an accident by slowing down and avoiding distractions, such as mobile phones. However, automated vehicles equipped with a wide range of sensors won’t make those mistakes, which could see road accidents fall significantly, when this technology becomes mainstream. Until driverless cars become the norm on UK roads, Road Safety Week reminds everyone to focus on driving safely to lower the risk of accidents.”