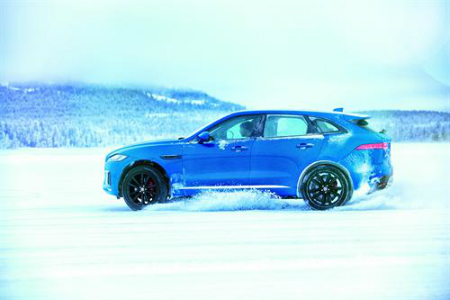 The sporting icon was testing a high performance Jaguar F-PACE S as part of an extreme driver training experience just 40 miles from the Arctic Circle. In 2017, the Jaguar Ice Drive Experience will be available to customers from all over the world. (for details please see here: http://www.jaguar.com/experience-jaguar/iconic-experiences/ice-drive-sweden.html)

José Mourinho said: “The experience was magnificent. For people in my world, I think a few days in a place like this is magnificent.”

In temperatures as low as -30˚, Mourinho’s driving skills were tested to their extreme limit in the Jaguar F-PACE by Finnish professional driver, Tommi Karrinaho.

Mourinho said: “I am always learning. Even in football, which is an area that obviously I feel that I’m an expert, I’m never perfect and I always learn.

“The flying lap with Tommi sent my adrenaline soaring. It’s something I’ve only ever experienced before when I have walked out in front of 80,000 football fans.”

Mourinho is experiencing widespread interest about his future, but in the isolation of Jaguar’s extreme testing facility in Sweden, the three-time Premier League-winning manager was philosophical about his next move.

Mourinho said: “I have worked for as long as I can remember as a manager and this is now the second time I have stopped in 16 years.  So it’s not a drama, but for sure I will be back soon.”

Mourinho owns a Jaguar F-TYPE Coupé and has already placed an order for the new Jaguar F-PACE. The Jaguar F-PACE offers an unrivalled blend of performance, design and practicality. To ensure that every system functions perfectly even under the most extreme conditions, the new F-PACE has been subjected to one of the most demanding test programmes the company has ever devised.