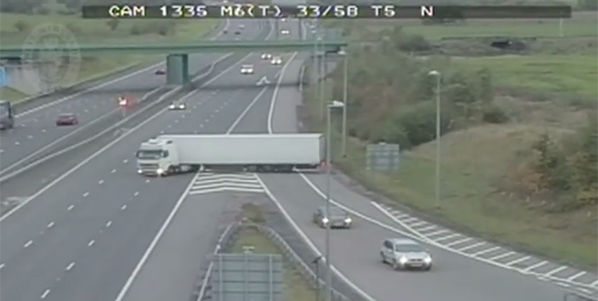 A lorry driver has been proscuted for performing a dangerous u-turn on the M6 toll last month, after joining the motorway from an exit slip road.

In a post on the West Midlands Police website, Leonid Papachin drove the wrong way down the slip road at junction T5 and, after realising his error, pulled onto the hard shoulder during rush hour. The 51-year-old then tried to rectify his mistake by executing a highly dangerous and illegal manoeuvre into the path of three lanes of on-coming traffic.

The footage shows Papachin’s 40+ tonne truck complete the u-turn and then drive off in the right direction. Motorway police, alerted by CCTV controllers, stopped the wagon a short time later where the driver was arrested and charged with dangerous driving.

Papachin, from Lithuania, was remanded in custody and appeared at Cannock Magistrates Court on 30 October where he was sentenced to 15 weeks in prison, suspended for two years and ordered to pay £85 costs. He was also disqualified from driving for 18 months after which he will be required to pass an extended test of competence.

Motorway Patrol Manager, Chief Inspector Jed White, said: “Unfortunately this type of incident is all too common on the motorway network, especially the M6 Toll, where drivers attempt to avoid charges for using the road. On this occasion the driver should have contacted motorway police immediately to help him manoeuvre safely.

“We will always prosecute offenders and, as this case demonstrates, the penalties can be quite severe. Our CCTV systems cover the majority of carriageways and are monitored 24/7, so there is no hiding place.

“I hope that it serves as a deterrent to anyone who thinks they can put other motorists in jeopardy by ignoring motorway regulations.”