Welcome to the fold: Nissan Juke and Lexus IS Saloon 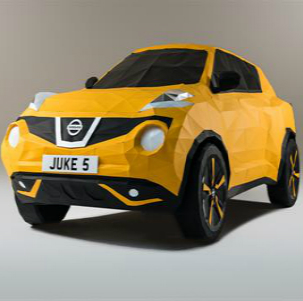 They say the best ideas start with a blank piece of paper and today, on  the Nissan Jukes 5th Birthday, British artist Owen Gildersleeve shows us why.

This fitting tribute comes from British artist Owen Gildersleeve who specialises in the Japanese art form of Origami; his offering of a life size replica of the Juke celebrates the success of a car designed in Japan and build in Sunderland.  Darryl Scriven, Design Manager at Nissan’s Design Centre for Europe, said: “The first step of any car design involves putting pencil to paper. From that simple start, it’s a complex journey to production involving hundreds of skilled people, thousands of man-hours and millions in investment. So we think it’s very apt that on its fifth birthday, we celebrate the Nissan Juke with a tribute that harks back to that simple, but bold, first step, all carried out with Nissan’s signature innovation and excitement of course.”

The Juke is Nissan’s second best selling model in Europe with over 700,000 sold since its launch in 2010, over 150,000 of these were bought in the UK alone. The Juke’s longer-term future in Britain was recently secured when Nissan confirmed that the Sunderland plant would produce the next-generation Juke benefiting from a further £100 million investment in the Sunderland facility and securing the plant into 2020.

Gildersleeve revealed that the project took 200 hours of work and 2,000 folded pieces of paper. The only other origami tribute of this magnitude was the Lexus IS Saloon; made from precision cut cardboard and featuring a fully functional engine, headlights, doors etc. It made its début at the Grand Designs show  in October when Kevin McCloud drove it to the launch of the show. 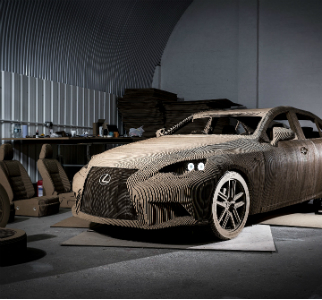 This piece of performance art celebrates the intricate craftsmanship and design that Lexus is renowned for and honours their master car-makers know as  the Takumi – an ancient Japanese word that roughly translates as “artisan”. They are tasked with personally ensuring, by hand and eye, that the cars coming out of our factories are built and finished to unprecedented standards. They fine tune their craft and practice their dexterity by learning to fold origami models using only their non-dominant hand.

They bring another benefit: their skills have been digitised and programmed into many of the robotic functions, raising precision standards to new heights. This development also means that the Takumi’s talents are highly transferable in mechanical form to other plants.

Both of these magnificent tributes are revealed as ‘World Origami Days’ are celebrated across the world between 24th October and 11th November.