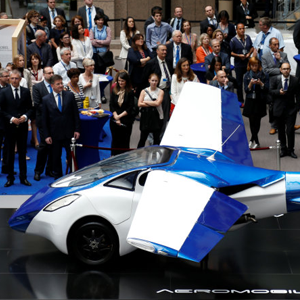 When Uber first announced that it was looking into flying cars, I was skeptical that the idea was little more than a very expensive pipe dream. But, a new hire — from NASA, of all places — shows how serious Uber actually is.

Uber has hired Mark Moore as director of engineering for aviation, Bloomberg reports. He’ll be working on Uber Elevate, which seeks to develop craft capable of vertical takeoff and landing (VTOL). Moore used to be an aircraft engineer at NASA’s Langley Research Center, and in 2010, he published a white paper about electric aircraft with VTOL capabilities that could replace cars for commuting.

“Uber continues to see its role as a catalyst to the growing developing VTOL ecosystem,” said Nikhil Goel, head of product for Uber’s advanced programs, in a statement.

Uber Elevate wants to upend the traditional work commute. The company produced its own 99-page white paper that envisioned a network of VTOL-capable aircraft that could simplify a suburb-to-city commute and general urban travel. “Think of it more like a flying replacement for the way most of us use cars today,” CNET’s Eric Mack wrote when Uber first published its paper.

“We’re excited to have Mark join us to work with companies and stakeholders as we continue to explore the use case described in our white paper,” Goel said.

It’s important to note that Uber’s aspirations don’t actually include making such vehicles. The company will likely contract that work out to other firms, just as it’s doing for its fleet of autonomous vehicles. Building a car costs billions — now imagine building a car that’s also a VTOL-capable aircraft. I don’t blame Uber for not wanting to touch that with a 10-foot pole.

Replacing cars with aircraft is about as far from simple as it gets. Airspace is incredibly well regulated, and it would require strong lobbying efforts to add a whole bunch of personal aircraft into the mix. The company would also need to flesh out an infrastructure, which would include “vertiports” scattered around suburbs and cities.

All this work means costs will be… high, to say the least. But Uber believes that, in the long term, VTOL can become an affordable method of daily transportation, especially as ridership increases and suppliers settle down into long relationships with manufacturers. There’s not exactly a precedent for this, so there’s no guessing how long that would take.

That said, Uber remains optimistic. Its white paper includes a 10-year plan for certification that would have pilot programs (no pun intended) and other testing taking place by 2025. It’s optimistic, but it’s exciting to think that everybody’s childhood dream of flying cars is slowly coming to fruition.